Earlier this year, I turned 60, not a birthday to bring joyful anticipation for whatever the future may bring, though I am trying to embrace my inner, and increasingly outwardly visible crone. A week after my birthday I received a letter from the Dutch public health authorities reminding me that it was time for my quinquennial cervical smear (sometimes called Pap smear). I dutifully made an appointment with my family doctor, and turned up a few days later for this medical check that is also not preceded by joyful anticipation. It was summer, and having learned from previous experiences, I remembered to wear a dress, no tights – attempting to make the process as quick as possible. It was not my usual doctor, but nonetheless I removed my shoes and underwear without any hesitation, clambered  onto the examination table, hoisted up my dress, tried to remember to breathe, and prepared myself for this necessary but usually unpleasant examination. For those who don’t know (most men, younger women), a cervical smear involves a metal device, shaped like a duck’s bill, inserted into the vagina. It is then widened, so the doctor can have a good look and insert a swab to take a sample of cells from the cervix. This really is not fun – certainly undignified, sometimes painful. Smear tests are perhaps rather like weddings and funerals – each one reminds you of others that have gone before. 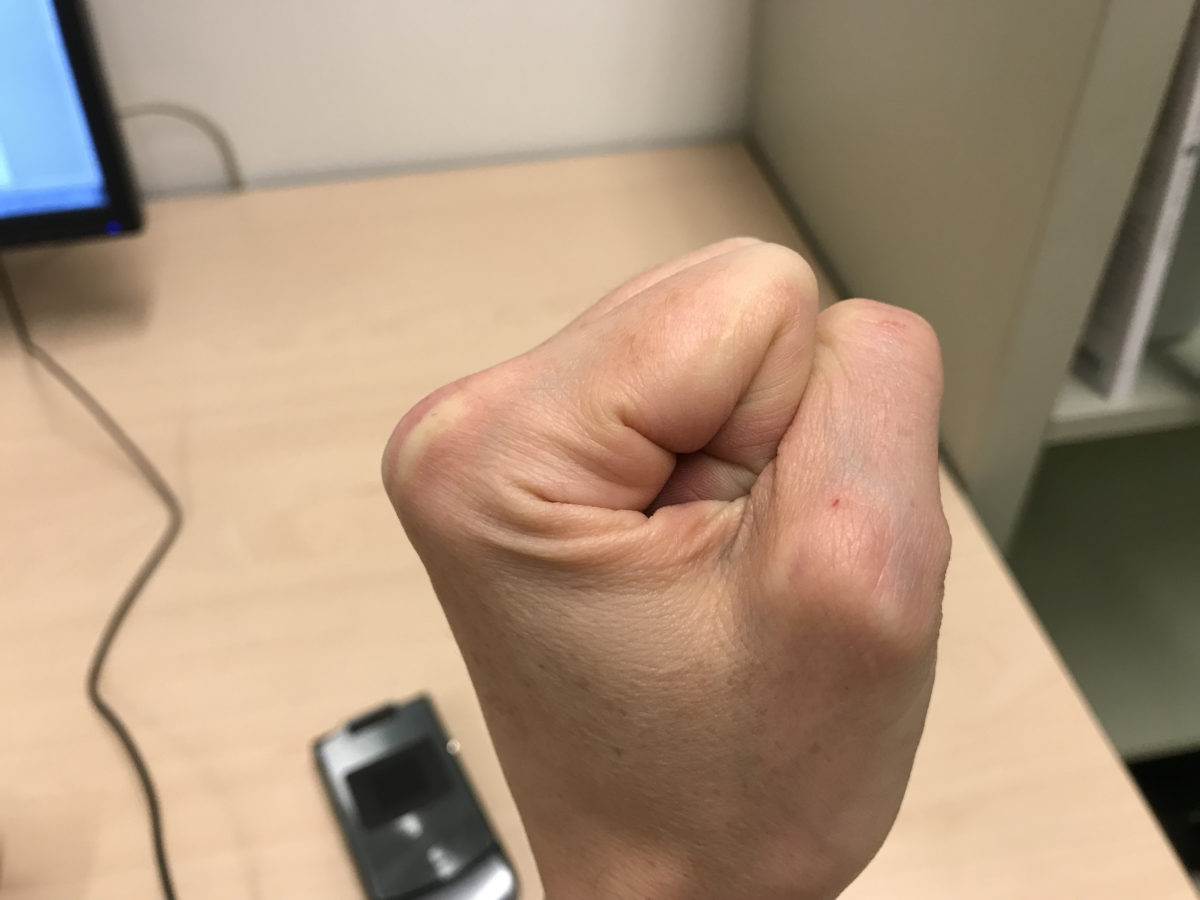 Simulation of a cervix, the hole created being where a teacher instructs the students how to collect cells with the brush

I thought back to the first time I lived in the Netherlands, during the 1993-94 academic year. Back then, as a foreigner, even one from elsewhere in the EU, I had to register with the police. I also had to present myself, with my passport and birth certificate, at the town hall so that my details could be recorded on the Dutch population register. I did not need to visit a doctor during that year, and never even registered with one. I turned 35 in May 1994, and a week later received a letter from a private medical laboratory suggesting I arrange to have a cervical smear. All 35-year old women receive such a letter, as testing happens every five years (starting at 30. Many other countries begin routine screening at 20 or 25, and thereafter at two- or three-yearly intervals). I was not so dutiful as I am now, and was horrified by the fact that public authorities, either the police or the town hall, had passed my details to a private health clinic. My Dutch colleagues did not see any problem, finding it an instance of good preventive healthcare, and by the standards of today this is really rather innocent surveillance. I did not avail myself of the opportunity as I was leaving the Netherlands in June, and because I was having smears every two years in England where I lived.

In my early 20s, I suffered a lot from thrush. I tried everything – western pills and ointments, homoeopathy, folk remedies involving live yogurt and cloves of garlic on a string. It was also the tail end of second wave feminism, during which women were fighting for abortion rights and more generally for control of our bodies. I never went in for the full-on self-examination (with speculum and mirror, sometimes undertaken in a consciousness-raising group) but I did attend a women’s self-help health group, and still have my copy of Our Bodies Ourselves, first published in 1971, and still in print). The recurrent thrush alarmed both me and my GP (general practitioner), and I was referred for a smear test. Abnormal cells were found first time round, so I had to go back again quite quickly, this time to an oncology clinic where I was required to remove all of my clothes, don a hospital robe that did not fully cover my body and that had CANCER in large red letters across the back. Nothing serious was found, but thereafter I was invited for a smear test every two years, and this continued until I moved to the Netherlands when I was 40.

Even though a smear test does not really take much time, these recollections of earlier experiences came to the surface while reclining on an examination table in 2019. I breathed slowly in and out, grateful for all that practice at yoga classes. I also chatted to my doctor, and learned the good news that regular check-ups stop at 60. I will not be reminded again. Of course, if I take up multiple male sexual partners or observe unusual discharge, I should let my doctor know. But Dutch medical professionals assume both of those are not very likely at my now advanced age. While writing this, I learned that in some countries screening continues until 65 or even 75. Perhaps this last smear is not such good news, or maybe other countries recognise that older women may still be sexually active.

These recollections are a reminder of the well-known adage of second wave feminism, that the personal is political, and that the personal could be generative of research and of design. Why do countries differ in the ages at which they start and stop routine screening? Why is the frequency different? Do these differences affect the detection and treatment of cervical cancer?

And what about the design of the thing? Plastic is used more frequently now. It is not so cold and hostile as the metal version, though less friendly for the planet. Are specula an instance of what I call ‘hostile technologies’, deliberately designed to exclude or cause discomfort?

The history of the speculum does not make for comfortable reading. References to something resembling the speculum date back to the first century, but James Marion Sims is usually credited with the invention of the modern version in the mid-19th century (Eveleth 2014), developed from his experiments on American slave women, some of whom he bought for the purposes of experimentation. The basic design has not changed very much over the past 170 years. Despite some efforts to innovate – curved duck bill, three-sided, self-insertion, inflatable – the traditional design prevails. Arielle Pardes (2017) suggests this is at least in part because of the slow pace of change in medical education. Others, such as Mary Daly (1978) might suggest it represents the continuing misogyny of western medical practice.

What do these recollections of smear tests at 25, 35 and 60 mean for the ‘Making Clinical Sense’ project? How do doctors learn to insert a speculum? After the speculum has been widened, the doctor does a visual exam – looking for what? Even though some men sometimes have problems identifying women’s sexual organs, I hope doctors know a cervix when they see one. I guess it is not hard to take a swab. My amateur view is that it would be considerably more difficult to find the right vein for taking blood, or to feel for an enlarged spleen. Maybe the most difficult part is dealing with nervous women, embarrassed and tense as they anticipate immediate discomfort coupled with fear about results that only arrive two or three weeks later. Some doctors don’t seem to worry too much about any of this, or have become desensitized to something that is a routine part of their work. Doctors have learned a few things since I was young, perhaps because there are now many more women doctors. For example, specula are now routinely warmed or lubricated, and one only needs to remove a minimal amount of clothing (though that may not be the case in many clinical settings). Clearly there is still lots more work to be done to understand the design of the speculum and its use in clinical contexts.

Boston Women’s Health Collective/Angela Phillips and Jill Rakusen (1971/1978) Our Bodies Ourselves. A Health Book by and for Women. Harmondsworth, UK: Penguin Books.