When the ethnographers in our project returned back to base after an intense period of fieldwork, one of the first things they did was take off their shoes. 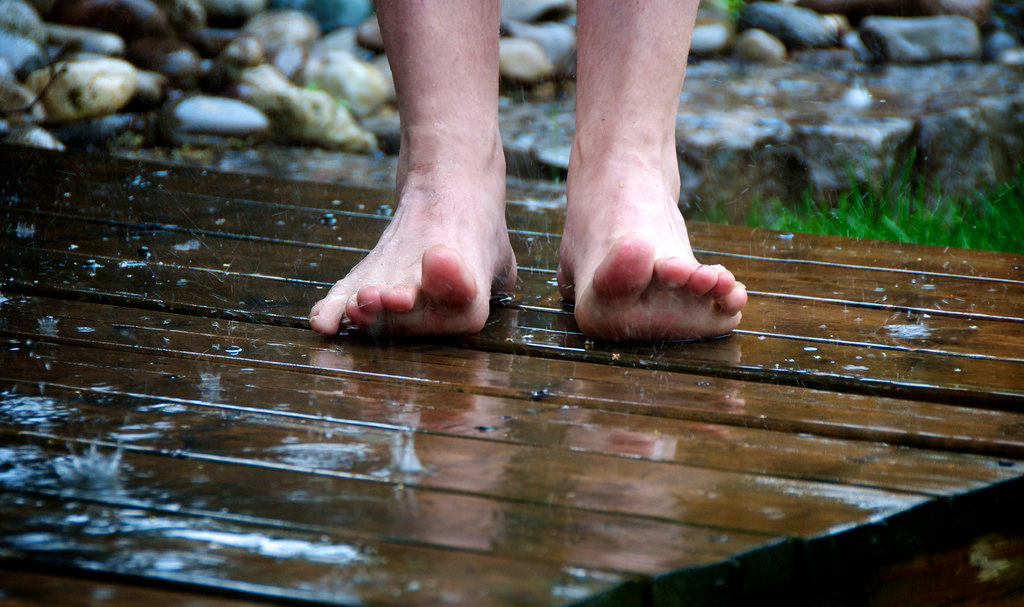 July 2nd 2018, MAASTRICHT – It was a beautiful bike ride through the Dutch forests, and for the first time that year we needed sunscreen. We were heading to the Brunssum Blote Voeten Park, a barefoot trail not far from our Faculty, Carla our wayfinding guide.

We started along the trail, shoes left in lockers, chatting and catching up on months apart, finding out about fieldwork adventures, new ideas, holidays. It was easy to get lots in conversation but the trail soon called us to attention. Smooth sand disappeared into woodchips, causing our toes to curl up a little. Soon a muddy trough greeted us, and tentatively we waded, sensing how far we could descend into the cool water, hands out for support. We climbed wooden beams like children, and looked over the park from up high. Down below we could see fellow barefooters inspecting splinters in their usually shoed feet, soft from years of woollen and cotton socks and slippers.

In his much cited article “Culture on the Ground”, Tim Ingold (2004) suggests there has been a bias in scholarship for head over heels and that we need a more grounded approach to human movement that is sensitive to the embodied skills of footwork. Shoes, he suggests, like chairs, are a technology which privilees the intellect over instinct. Ingold argues that:

“The mechanization of footwork was part and parcel of a wider suite of changes that accompanied the onset of modernity – in modalities of travel and transport, in the education of posture and gesture, in the evaluation of the senses, and in the architecture of the built environment – all of which conspired to lend practical and experiential weight to an imagined separation between the activities of a mind at rest and a body in transit, between cognition and locomotion, and between the space of social and cultural life and the ground upon which that life is materially enacted.” (2004, p 321)

While my young son can still squat comfortably, he has quickly adopted shoe wearing as habit as he learns to traverse the cobblestone streets of Maastricht. The first time he encountered grass he begged to be picked up, the first time in sand he tried to flick it off. We become shoe-bound so quickly that it opens up a gap in the market for footwork retraining. Barefoot trails offer the senseless feet of urban dwellers the chance to rediscover mud and woodchips and splinters all over again. The training is not through a guide or signposts but through subtle drawing of attention to change – visitors to such parks are guided by rails, by abrupt differences, by needing to climb or descend. The differences need to be obvious for the rusty foot feeler doesn’t notice subtlety.

We came back from our barefoot trail with our feet tingling. The walk was not only a perfect way to reconnect as a group, but also to disrupt our sensory habits, just for an afternoon.

Image by bark (Flickr), used under the Creative Commons lisence.