RAVENSTEIN, August 2019—in the last week of August, Andrea and I attended our last WTMC (Netherlands Graduate Research School of Science, Technology, and Modern Culture) summer school at Soeterbeeck conference centre—an old, semi-converted, monastery—in Ravenstein, Noord-Brabant province, the Netherlands. Here, I had the opportunity to present a brief extract from my current work, and to receive feedback from my fellow PhDs, along with Michael Guggenheim, the workshop’s anchor teacher. 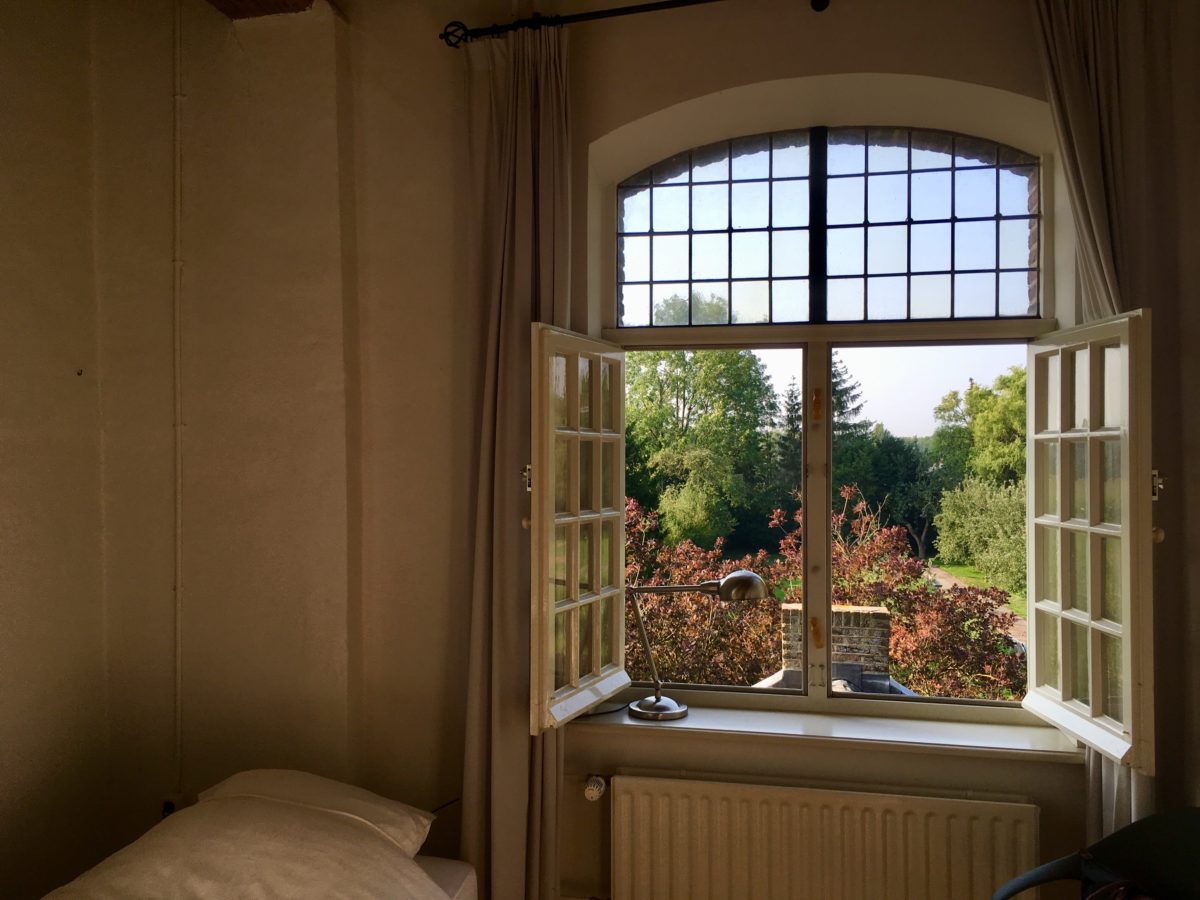 Soeterbeeck's rooms for guests, once the quarters of nuns. Photo: Author, August 2019.

I am currently in the process of writing the (likely) third chapter of my monograph, a chapter that explores the social aesthetics of place. The purpose of this chapter is twofold. First, I hope to open up, and begin to work towards, an understanding of the way in which place might be implicated in the translation of knowledge. More specifically, this means considering how the unique environment of the anatomy building—its subtle and slippery, aesthetic and atmospheric qualities—might have a role in producing the daily lives and practices of medical educators and novice physicians at Semmelweis University. Here I argue that the anatomy building as ‘place’—particularly its affective, sensory, and material dimensions—cannot be disentangled from the translation of anatomical knowledge practiced at Semmelweis, along with the material collected during my fieldwork, and the analytical arguments presented throughout my thesis.

The second aim of the chapter is to orientate my audience within the ‘place’ of my monograph, by making the anatomy building, the place of my research, a little more familiar. I attempt to do so by communicating the specific affective, sensory, and material dimensions of Semmelweis’ Department of Anatomy, Histology, and Embryology, via written text, photographs, and drawings. Here, my purpose is to translate some of these qualities and textures—qualities and textures which are inextricable from the material and analysis presented elsewhere in my work—in the hope of affording a richer reading of my arguments regarding the embodied and multisensory nature of anatomy training at Semmelweis that will be presented in part two of my thesis,

The chapter—along with my theoretical understandings of the atmospheric qualities of the anatomy building—functions in relationship with David MacDougall’s (for example, 2006, 2015) visual anthropological notion of ‘social aesthetics’ and Edward Casey’s (for example 1996, 1998, 2001) philosophical, phenomenological understanding of ‘place’. I then—in an attempt to accomplish the tricky task of translating the dimensions of aesthetics and place in written ethnography—draw upon the knowledge and work of anthropologist Kathleen Stewart, whose writing on affect, and in particular her book ‘Ordinary Affects’ (2007), has influenced my creation and use of ‘affective fieldwork excerpts’, three (truncated versions) of which, I share below.

My hope is that, by following Stewart’s lead—by taking her ‘experiment’ in affective ethnographic writing seriously—I might too ‘provoke attention’ to the forces of the everyday, making them animate, and therefore, in some manner, I might grapple with, and help translate, my embodied version of the affective, sensory, and material dimensions of the anatomy department. Dimensions which, though I contend are integral to human being and knowing at Semmelweis, are often elusive and push back against standard forms of representation.

‘I write not as a trusted guide carefully laying out the links between theoretical categories and the real world, but as a point of impact, curiosity, and encounter… [my role is] not so much a subject position or [as] an agent in hot pursuit of something definitive as a point of contact; instead, [I] [gaze], [imagine], [sense], [take] on, [perform], and [assert] not a flat and finished truth but some possibilities (and threats) that have come into view in the effort to become attuned to what a particular scene might offer’.

I. A quiet Tuesday lecture

There are only 16 students in the lecture theatre today.

The lecturer is using a hands-free microphone, but I am having difficulty making out what she is saying across the echoes and creeks of the empty theatre.

She moves to the chalkboard and starts drawing, saying, as she scrapes the chalk about, ‘the central canal, it gets deeper and deeper’. Here, she presses harder and the chalk screeches, leaving a thick, vertical line down the board.

I look around and see that the students are quickly copying the drawing into their notebooks. When the lecturer picks up a new, differently coloured, piece of chalk, I see the students swap their pens in unison—the zips and rustles of their pencil cases, confirming this change in colour.

The lecturer is now explaining the role of the cerebellum in human balance. She plays at standing on a tram, holding an imaginary pole, her tram stops, and she jolts forward, pretending to collect her balance.

She finishes the lecture with a drawing of the central canal. Its unmistakable butterfly silhouette is already in the process of being erased as we exit the lecture theatre.

She is working to expose the spinal cord. We all gather around the cadaver, straining to get a good look. She says loudly, and to no one in particular, ‘feel it. Not with one finger, really feel it with your whole hand’.

The formaldehyde in the air is strong now and she says that she ‘cannot see past it’, though she does not slow down or stop what she is doing. She continues on, scalpel in hand, and now occasionally wipes her eyes as best she can on her shoulder or forearm.

She continues cutting into the back of the cadaver, spreading aside anything that impedes her access to the spinal cord. She looks up at me and says, while smiling, ‘why don’t you do it, are you afraid, or what?’

As she works, I watch the students’ faces. They appear surprised or perhaps amazed, by how quick and rough, yet precise, she is in her actions. One student says to another, ‘she’s really getting in there’.  She hears this and responds, ‘you have to go deep and cut it deep, otherwise you’ll see nothing’. The student replies, ‘like a butcher’. Her response: ‘yes, like a butcher, but surgery’.

She leaves the room and re-enters with a new tool. She says loudly, ‘look!’, holding up what appears to be a pair of large stainless steel pliers. She tells the students that this is a ‘big tool for muscles and ligaments’ and that it might get ‘noisy’.

She continues working on the cadaver’s back, allowing students to also try out the tools. I now find out what the red plastic buckets underneath the gurneys are for—unwanted pieces of the cadaver which have been dethatched from the whole.

Her classroom, dissection room one is a large room, with walls that reach the ceiling. The rest of the dissection rooms housed in the old wing are smaller and have walls that only make it three quarters of the way up.

I am sitting now in room three and it is very loud and hard to hear. We are in an 8am class and, like myself, the students are either running late, tired, or both. Tiles equally cover the floor and walls—cream-brown for the floor and a gentle blue-green up the walls. This, however, causes echoes, and adds to the problem of noise coming from the other classrooms. Looking around I notice that many of the wall tiles have been damaged or have completely fallen, and this leaves small pieces of concrete and tile on the floor, along with intermittent naked concrete squares in the places where a tile has given way. There is a drain in the centre of the room, which the floor lightly slopes towards, allowing for a good hosing down during a clean. 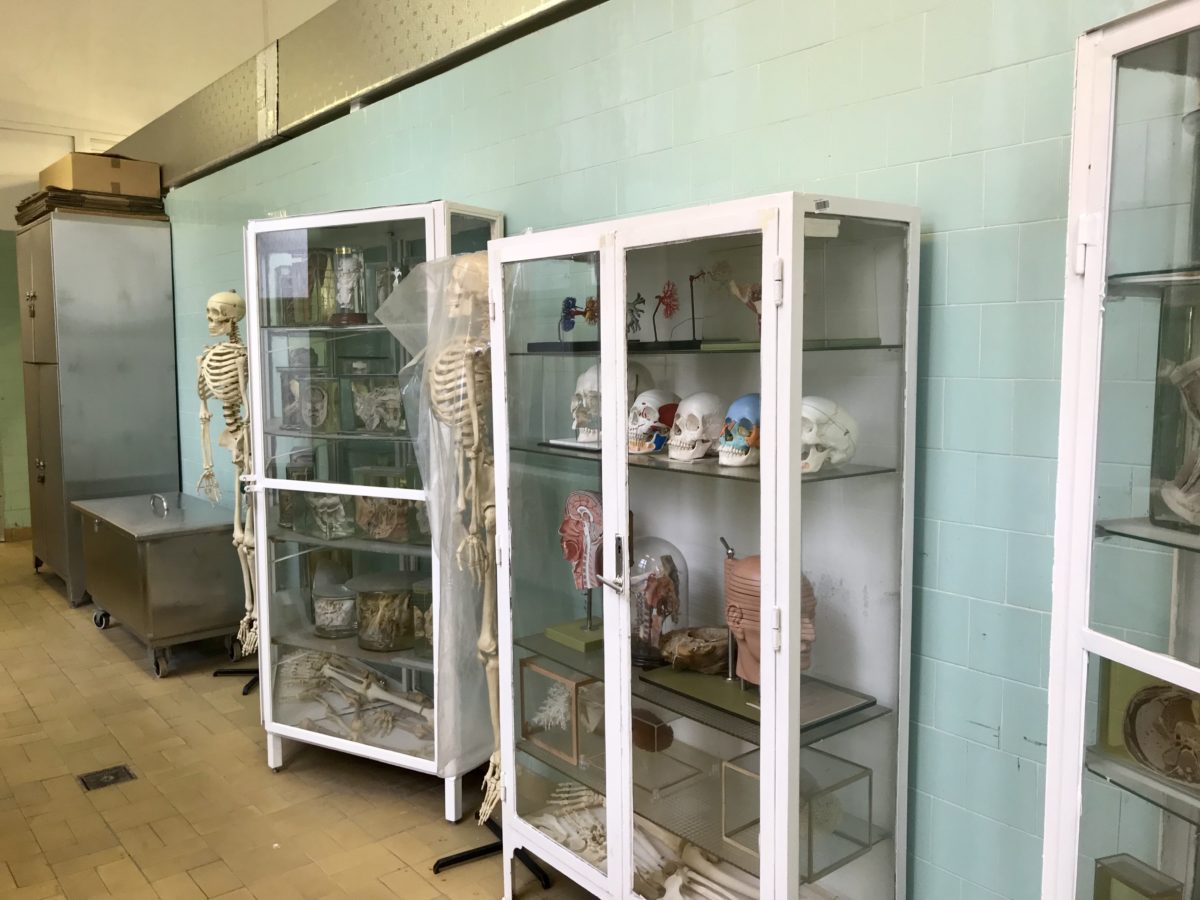 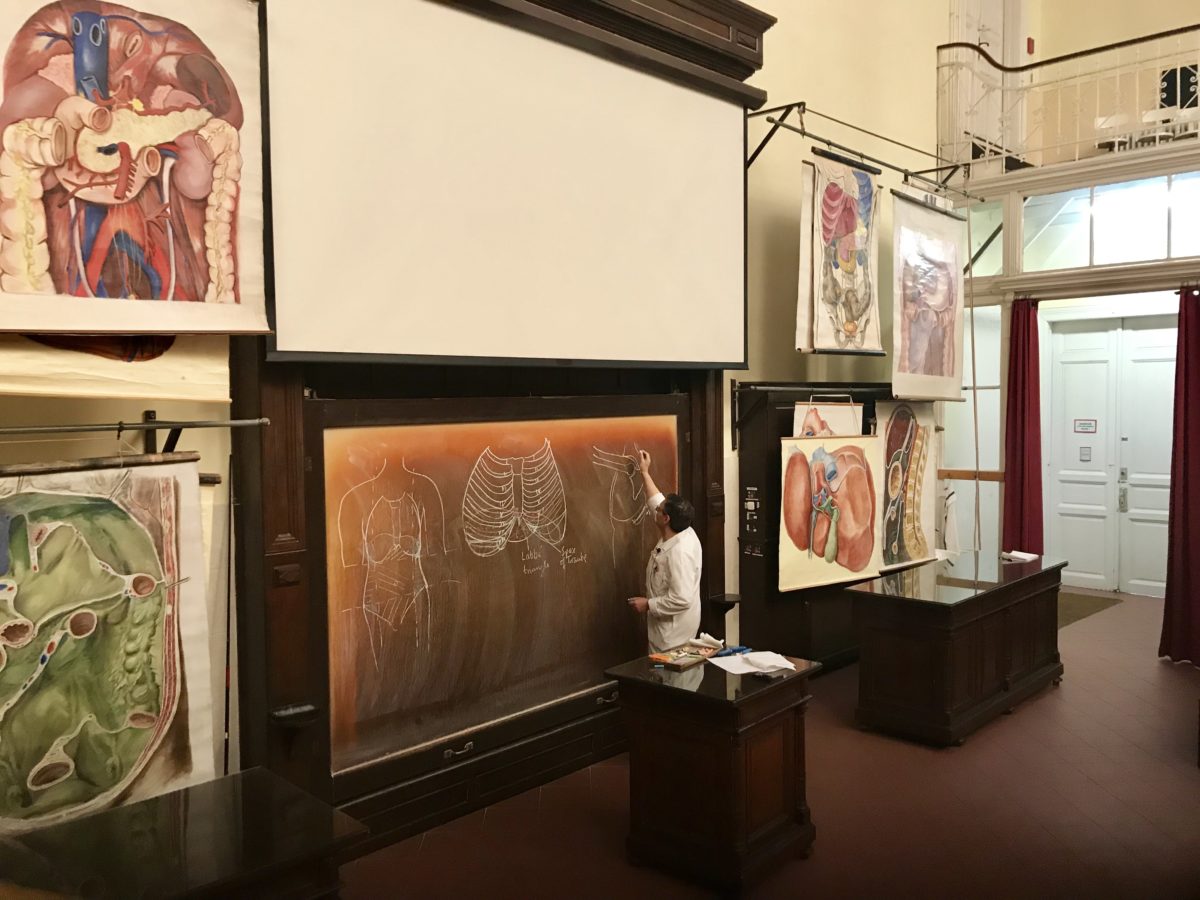 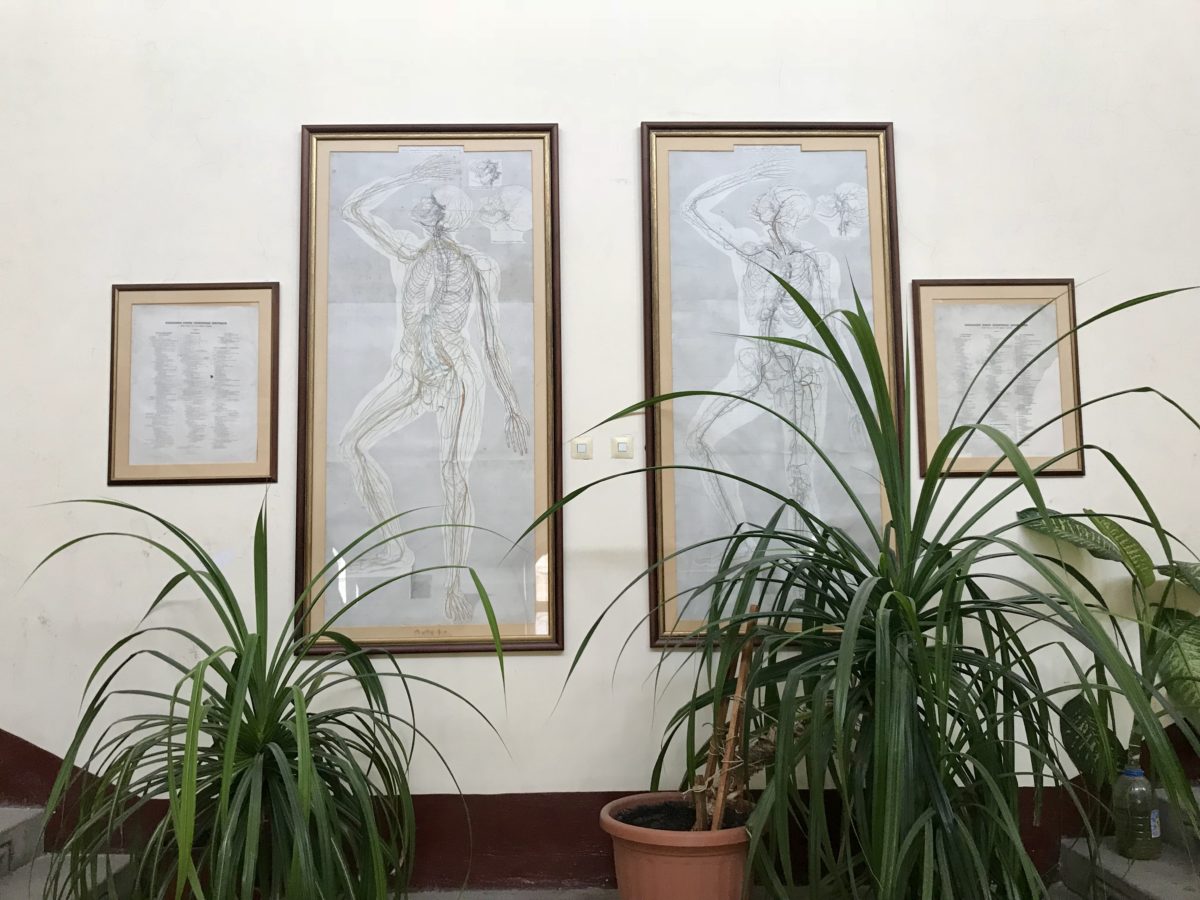 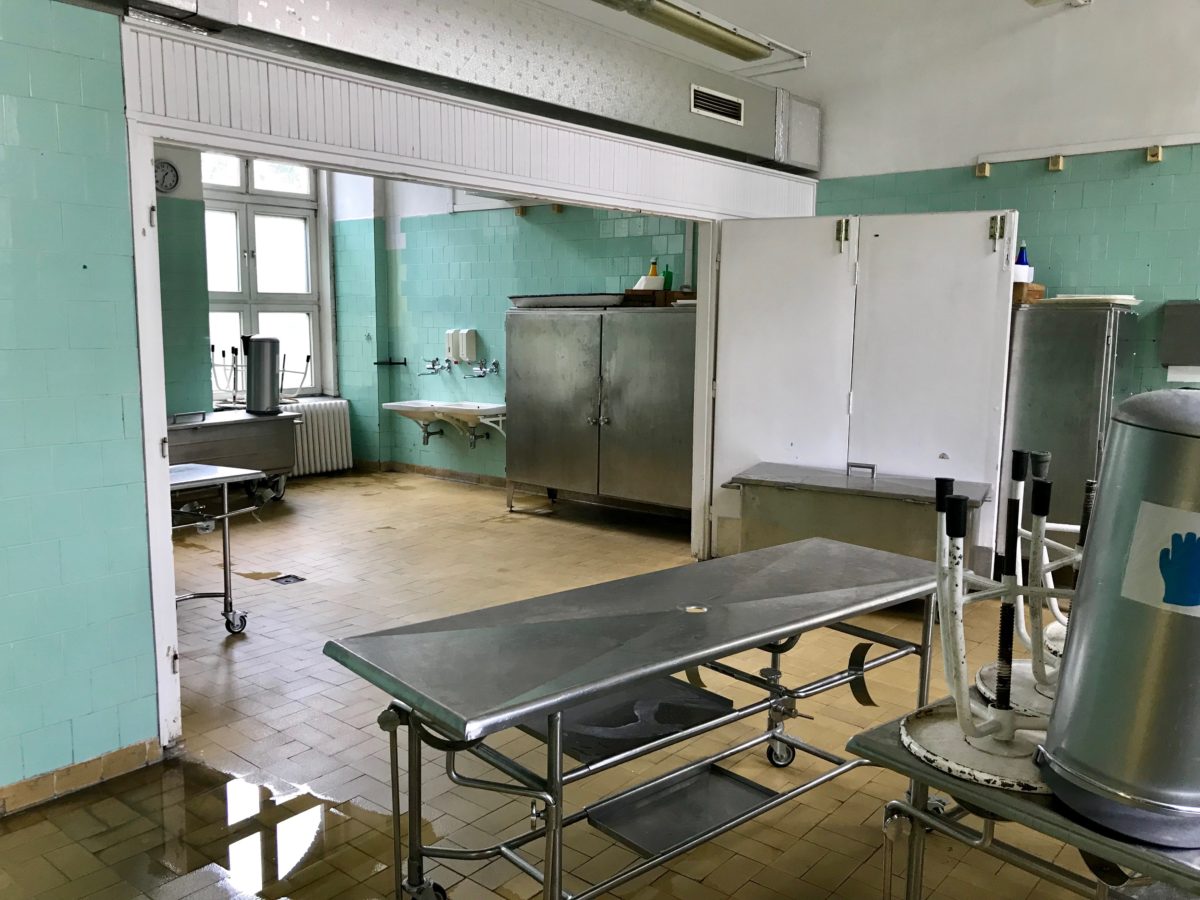 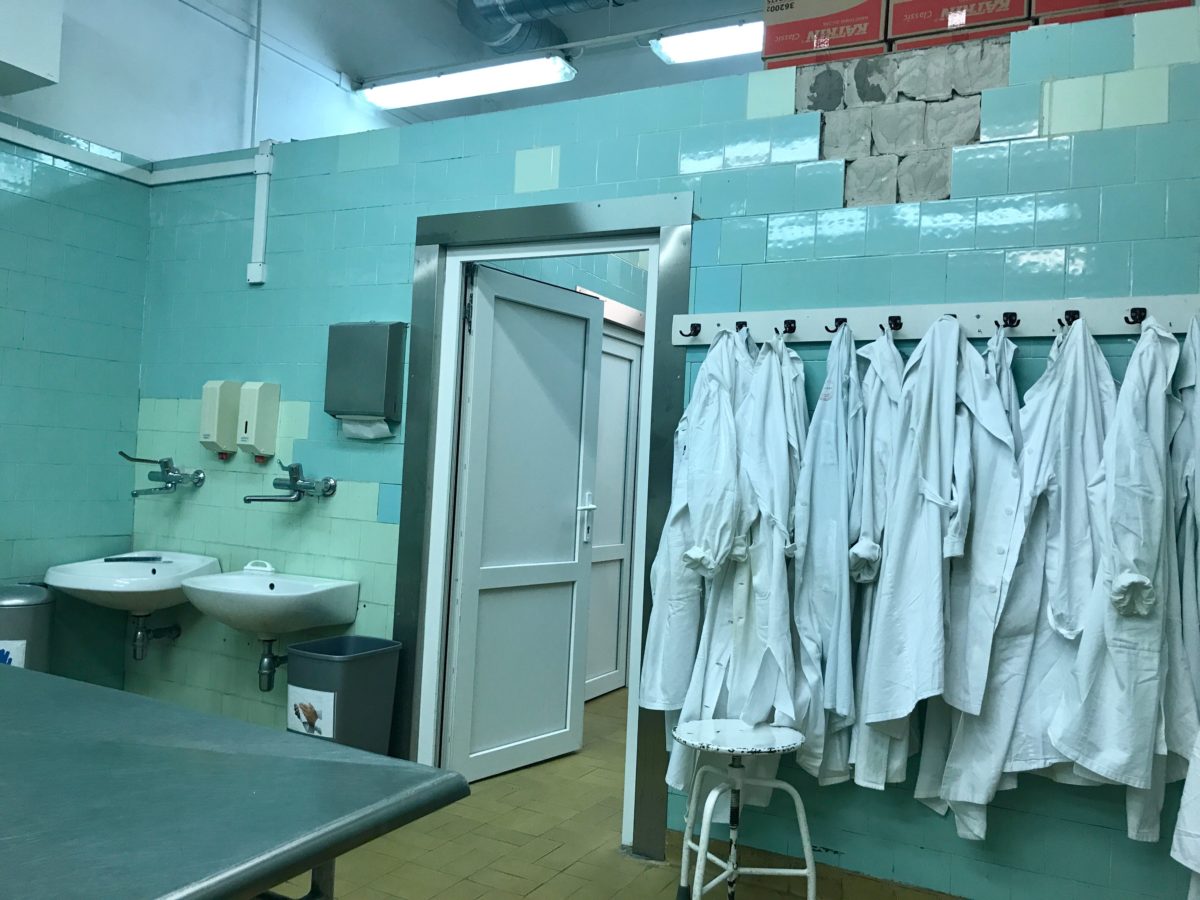 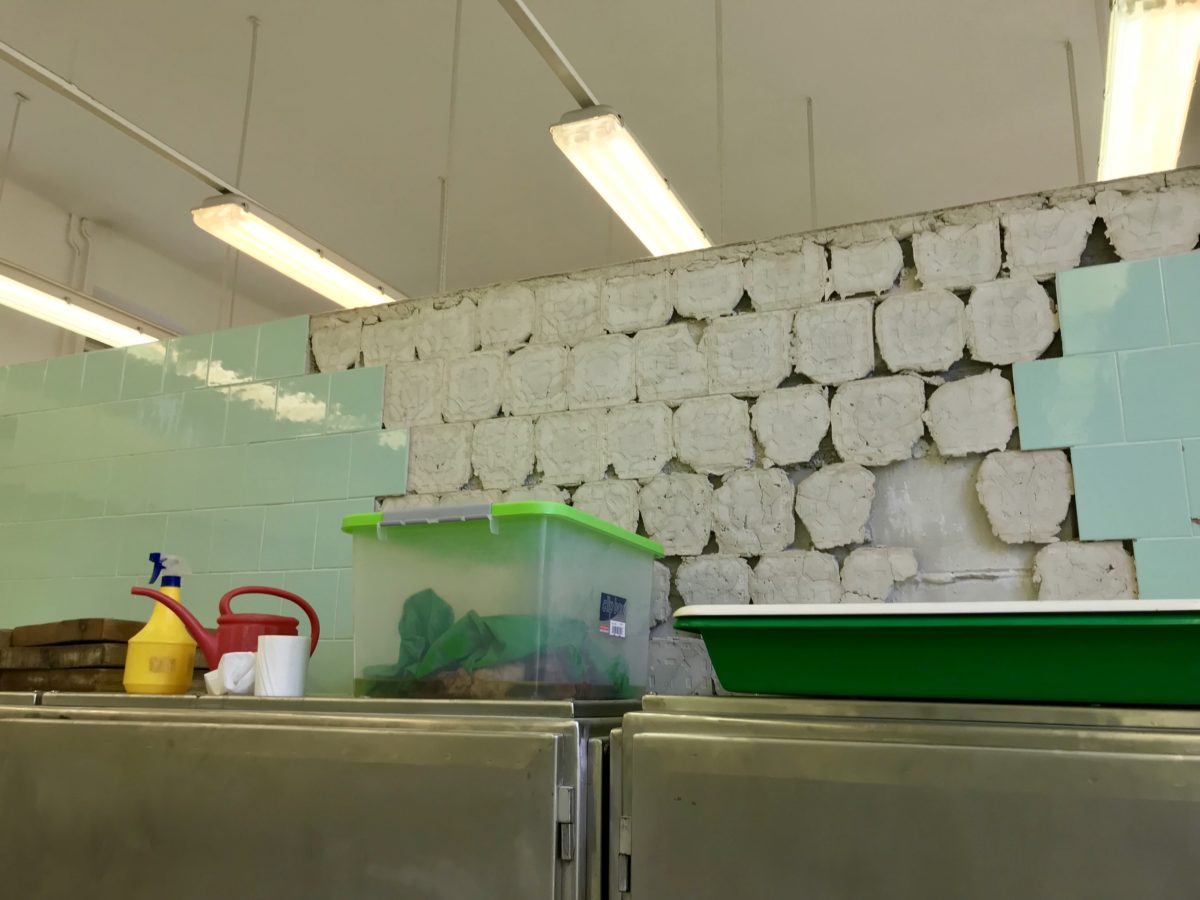 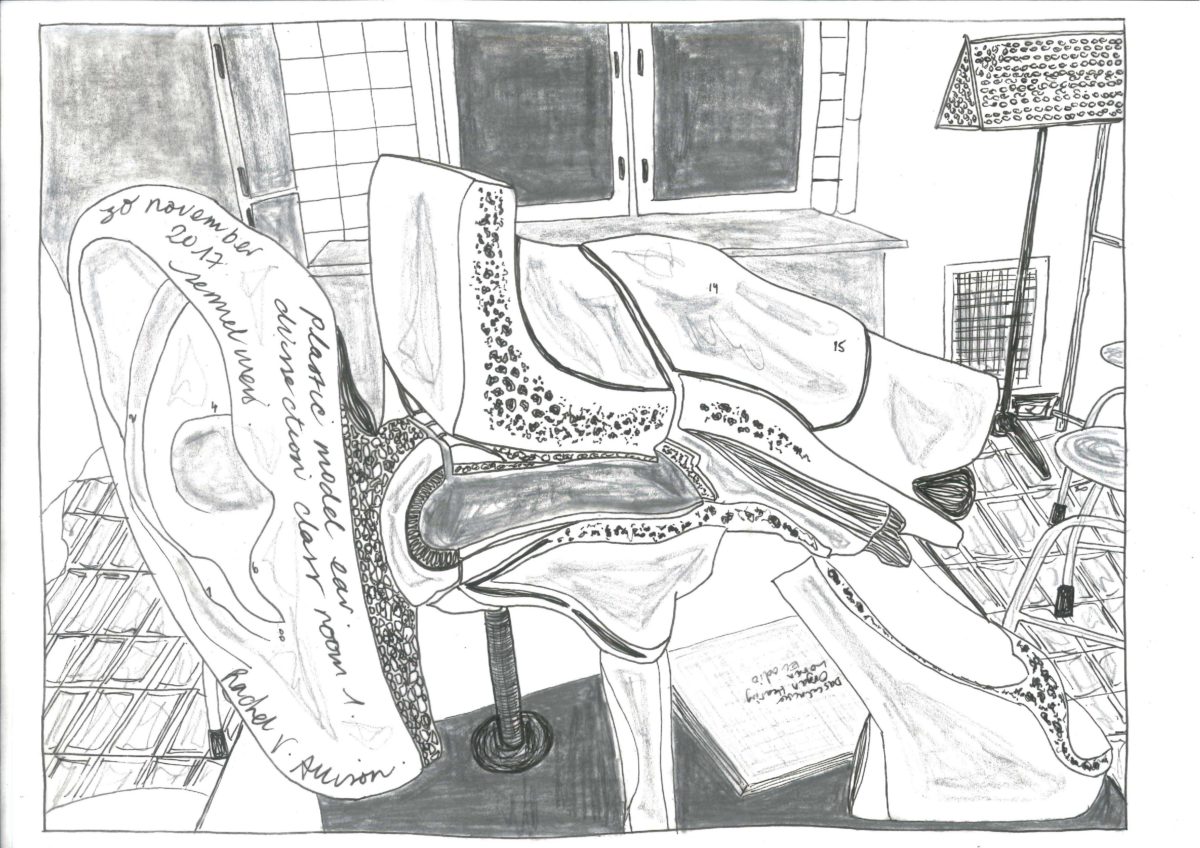 Ultimately, with this work, I hope to persuade readers of the richness of knowledge production and writing, which might come from paying greater explicit attention to the affective, sensory, and material dimensions of place in ethnographic research. Indeed, writing this now, and reflecting on my time in the WTMC graduate programme, I am beginning to wonder as to the way in which Soeterbeeck’s unique, rustic yet ornate, contemporary and historical, material and sensory environment might be implicated in the knowledge practiced and translated at WTMC’s workshops and summer schools—the possible manner in which the old monastery’s affective and atmospheric qualities might, in fact, be entangled within the training, knowledge, and bodies, of the Netherlands’ new generation of STS scholars.

The below photographs might help to give you an understanding of the affective atmosphere, which I am now pondering. 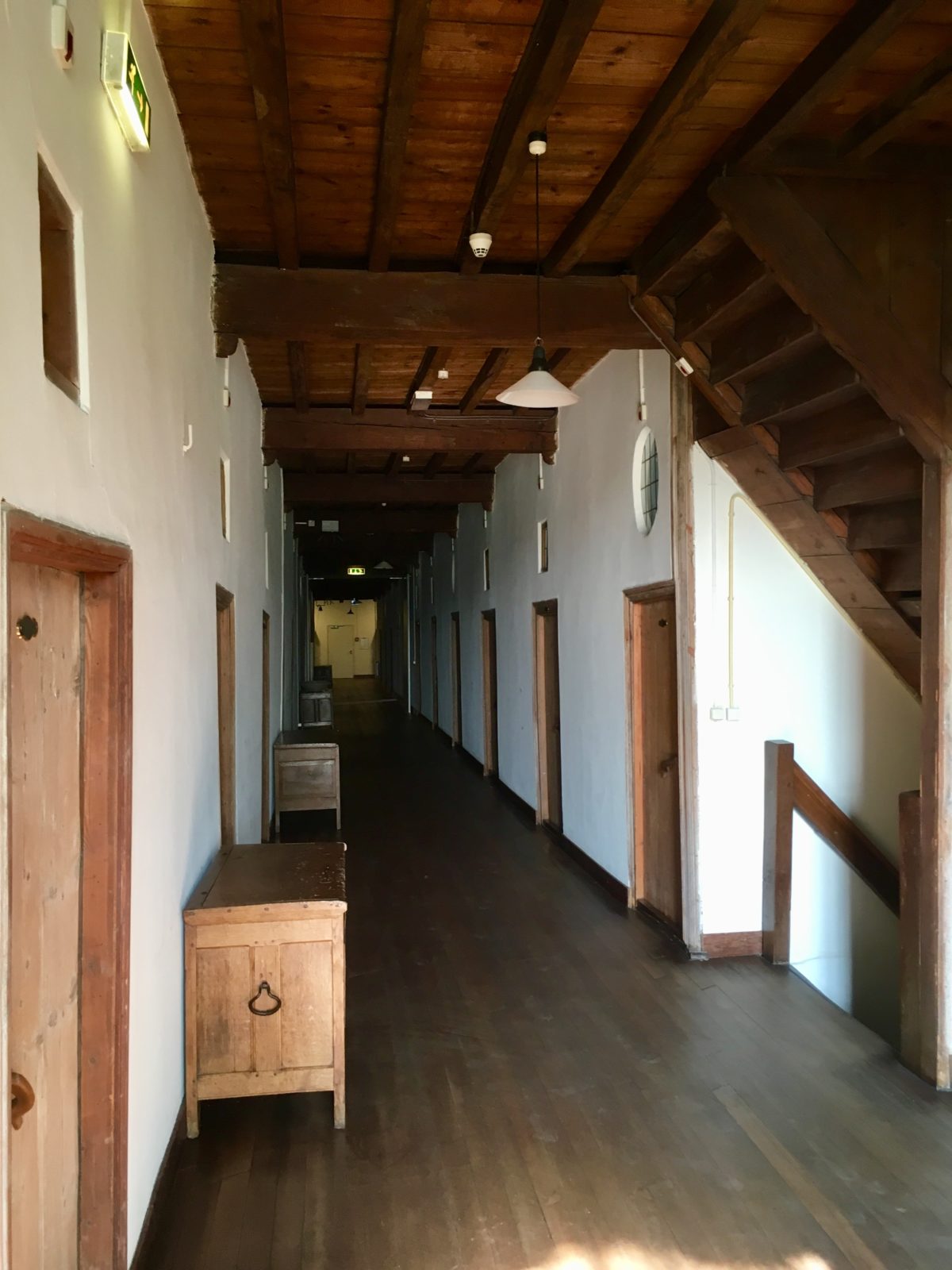 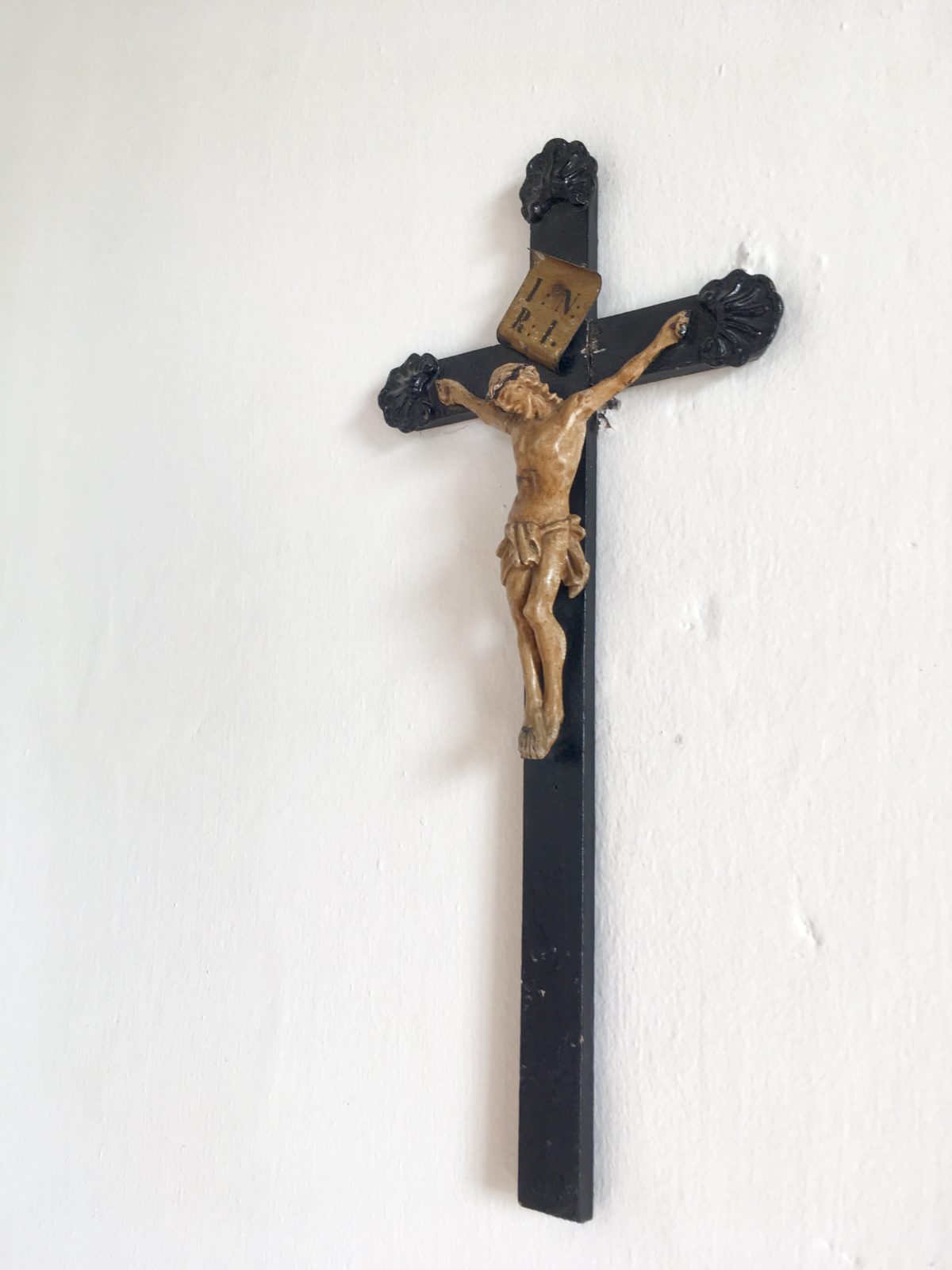 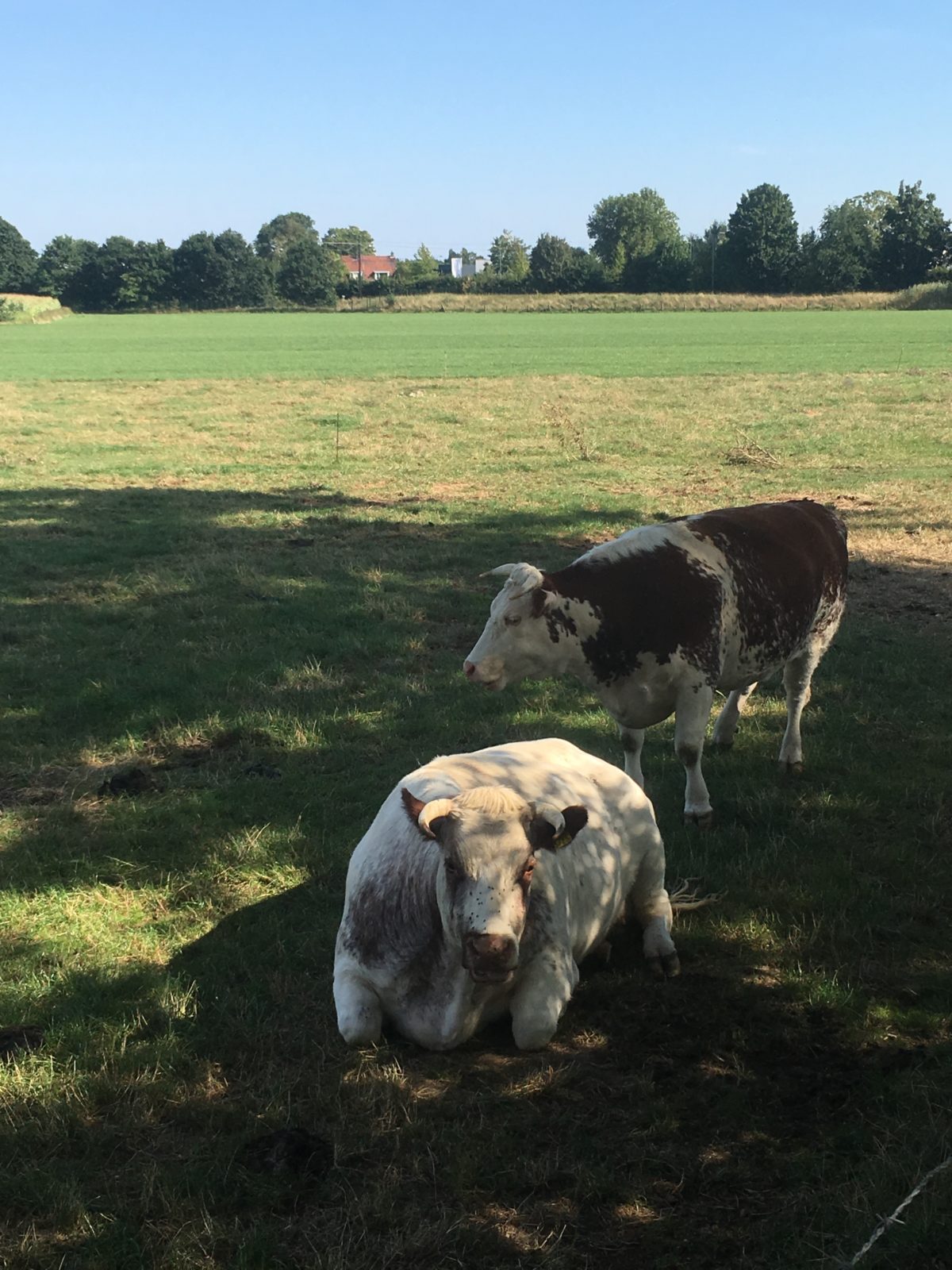 Casey, Edward S. 1996. “How to Get from Space to Place in a Fairly Short Stretch of Time.” In Senses of Place, edited by Steven Feld and Keith H. Basso, 13-52. Santa Fe, New Mexico: School of American Research Press.

Casey, Edward S. 2001. “Body, Self and Landscape: A Geophysical Inquiry Into the Place-World.” In Textures of Place: Exploring Humanist Geographies, 403-425. Minneapolis, MN: University of Minnesota Press.