The last week of March I had the chance to participate in an project of the Young Philharmonic Orchestra Karlsruhe, Germany (https://juphka.de/projekte/). Playing a music instrument is very different from diagnosing hospital patients. Yet, during one rehearsal of the Schubert C-Major Symphony I suddenly had to think of the Making Clinical Sense project and the issues addressed by the researchers in our team. One core question of the Making Clinical Sense project is how bodily skills of physical examination are taught and learned in medical schools. As a research assistant I am not directly involved in answering these questions but still I listen to the fieldwork experiences of everybody in the team, their thoughts, and ongoing conversations. And sometimes, these even travel further into other – seemingly unrelated – moments and practices in my life. This time into the orchestra rehearsal of Schubert’s symphony in Karlsruhe. 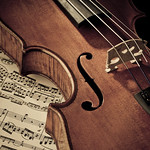 It was a rhythmically difficult part. In his very kind and inspiring way, the conductor asked the first violins to sing several bars two times before then playing them again on their music instruments. It was noticeable – and audible – that his technique worked. Singing helps to internalise, to feel and in some way to embody the rhythm. In addition, it is a useful practising technique as it separates the multiple sensory skills needed when playing an instrument. When we sing a rhythm, it is easier to concentrate on the rhythm itself and listen and feel how it sounds. When we play the same part on our instrument, finding the right movements of the fingers, arms or lips immediately adds another level to the task. Just as doing physical examination, playing in an orchestra challenges a set of simultaneous bodily and sensory skills. Teaching and learning these requires such techniques as singing the rhythm, or attentively listening to the other instruments by mixing up the usual orchestra seating plan. In an earlier logbook entry, Anna Harris wrote about how the creativity and improvisation of instructors of physical examination skills often go unnoticed (see: Time for Tinkering by Anna Harris). During our week of orchestra rehearsals with the Young Philharmonic Orchestra Karlsruhe I had the privilege of observing and learning from a range of similar creative instruction techniques of our conductor and everybody in the orchestra – an experience I am very grateful for.

In her work, Melissa van Drie (2013) nicely describes another link between orchestra music and the teaching of medical skills. It was in a lecture in the 1960s, when the famous cardiologist Harvey played recordings of symphony orchestras to his students to teach them aural identification skills. Harvey’s idea was that listening to the orchestra and learning to focus their attention to the sounds of individual instruments within the orchestral background will help the students in later analysis of heart sounds (for more on the education of attention see also the forthcoming book A sensory Education by Anna Harris).

Do you now want to try it yourself? Can you detect all the different instruments that play in the second movement of Schubert’s C-Major Symphony?