The Skillshare Writing Workshop we hosted in July 2018 inspired us to make a concerted effort to hone the craft of writing within our project team. In the last year, we have taken Ursula K. Le Guin as our guide. Working through the exercises in her book – Steering the Craft – has helped us to embark on an exploration of the connections between ethnographic and creative writing. 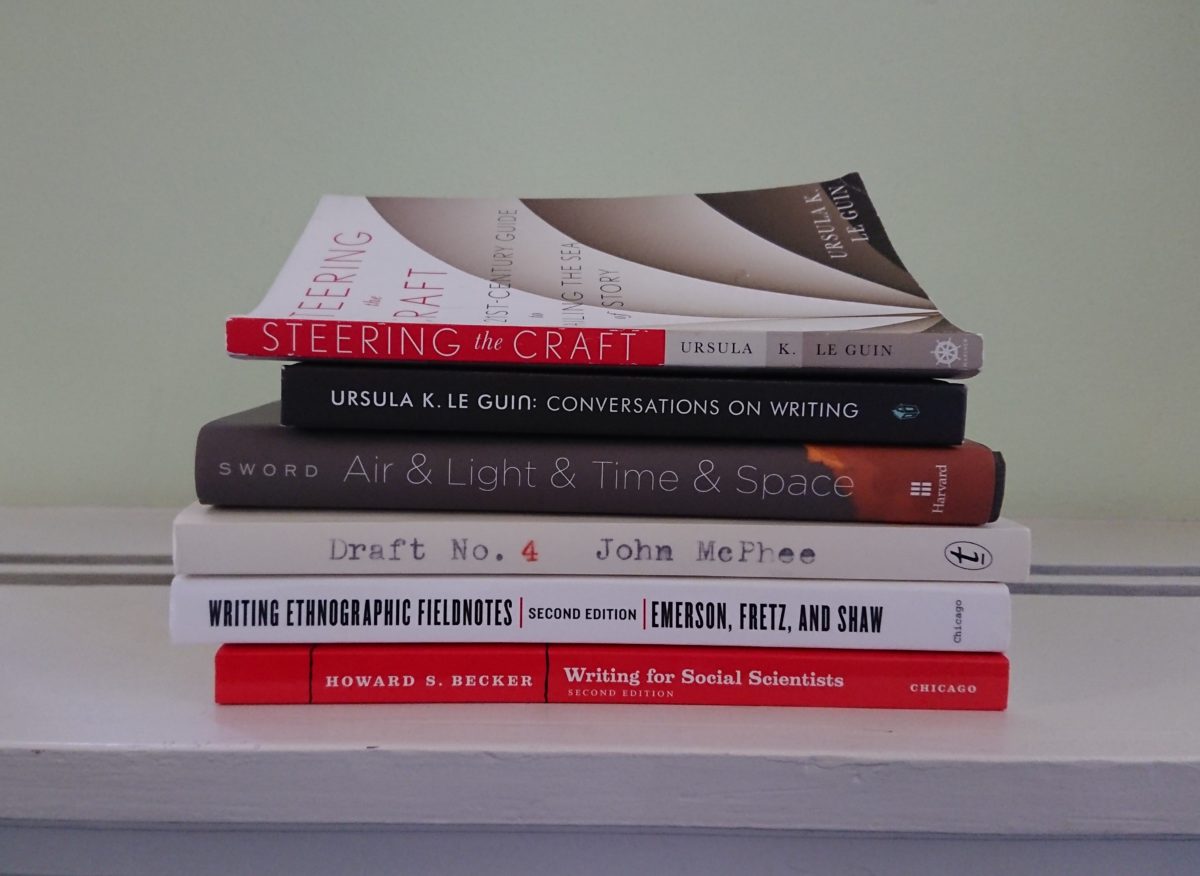 Le Guin’s Steering the Craft: A 21st Century Guide to Sailing the Sea of Story is “a handbook for storytellers” (p. iv). As we wrote our way through exercises, we did our best to give ourselves over to Le Guin’s sage advice on writing “narrative prose” (ibid.), but our discussions afterwards always begged the question: What can we take with us in our ethnographic writing? In many ways, we regard ethnography as storytelling, albeit storytelling bounded by academic conventions, and while we puzzled over the relevance of some exercises (point of view and voice being particularly difficult), we delighted in others. Below I share some of my own reflections on a topic I found particularly intriguing – repetition.

Repetition in Narrative and Argumentative Writing

“…to make a rule never to use the same word twice in one paragraph, or to state flatly that repetition is to be avoided, is to go right against the nature of narrative prose. Repetition of words, of phrases, of images; repetition of things said; near-repetition of events; echoes, reflections, variations: from the grandmother telling a folktale to the most sophisticated novelist, all narrators use these devices, and the skillful use of them is a great part of the power of prose” (Le Guin, p. 37).

Formative language arts teachers taught me to avoid repetition. They were tasked with training us students in the art of the argumentative essay. Thesis statements should stand prominently in the introduction and repeat themselves in the conclusion, but otherwise every paragraph – every word – was precious, and they should work to advance an argument. Read: Don’t waste time repeating yourself; new paragraph = new idea. This was the world of five paragraph essays and timed writing assignments.

My essays have gotten longer, with more time allotted for their completion. Five paragraphs turned into five pages turned into five sections of five pages turned into five chapters (my current endeavour). With each multiple of five, the chances of losing the reader – and myself – in the text has increased. It has been a slow realization that the straight jacket of no repetition imposed on me in high school was only a pedagogical tool for weeding out redundancy, but deliberate repetition can, in fact, be a helpful stylistic and structural tool.

Le Guin, of course, pushes readers beyond literal repetition of thesis statements. She draws attention to ways in which narrative writers use repetition of words, phrases, and events to create rhythm, invite laughter, build suspense, and elaborate themes.

How might ethnographers use repetition to enhance their writing? In order to allude to the possibilities I will engage in a brief show and tell of a writing exercise I completed using ethnographic material.

Here are Le Guin’s instructions for one of the exercises on repetition: “Write a paragraph of narrative (150 words) that includes at least three repetitions of a noun, verb, or adjective (a noticeable word, not an invisible one like was, said, did)” (p. 41).

And here is my attempt using ethnographic material:

The truncated gynaecology mannequin lay with its leather buttocks towards the edge of the examination table, imaginary legs splayed so as to permit the medical student access to the vagina. “Ow, ow, ow!” the tutor exclaimed on behalf the mannequin. The student had been caught in the act of withdrawing the speculum with the blades open, an act that would have been painful for any real woman who did not have an oversized slit for a vagina. The tutor instructed the student to begin the speculum examination again, this time with the tutor offering commentary from over her shoulder. The student moved to part the labia majora with the thumb and forefinger of her left hand to make room for inserting the speculum. Wrong position. On a real woman, the entrance to the vagina would be much lower. Begin again. She parted the labia majora correctly, and she began to insert the speculum. Wrong angle. The speculum was to be parallel to the angle of the woman’s legs (if her feet or knees are propped up) so that the blades, once fully inserted, will be in position somewhere below the cervix. Begin again. Once again, she parted the labia majora, and this time she was able to actually insert the speculum. Wrong technique. The blades should not be opened until the speculum is fully inserted to avoid causing the woman pain. Begin again.

Learning bodily skills requires at times painstaking repetition. I can emphasize this aspect of learning by using repetition in my prose, but by juxtaposing the repetition of the word “wrong” followed by an explanation of the mistake with the command “begin again”, I also show that repetition in learning is not about doing the exact same thing twice. Instead, it is about making adjustments, what students and tutors would likely recognize as advancements in skill.

Taking my cue from Le Guin, I suspect repetition in writing should work similarly to repetition in learning. Whether words sprinkled in a paragraph or events spread across a book, to repeat is not to do the same thing twice, contrary to the word’s denotation. Perhaps “advancement” is not the right word, but with each repetition, something should shift, whether that be the way in which the piece affects its audience or the argument the author makes.

Thank you to Janelle Taylor for recommending Le Guin’s Steering the Craft.