‘If there are words for all the pastels in a hue—the lavenders, mauves, fuchsias, plums, and lilacs—who will name the tones and tints of a smell? It’s as if we were hypnotized en masse and to selectively forget. It may be, too, that smells move us so profoundly, in part because we cannot utter their names. In a world sayable and lush, where marvels offer themselves up readily for verbal dissection, smells are often right on the tip of our tongues­—but no closer—and it gives them a kind of magical distance, a mystery, a power without a name, a sacredness.’ 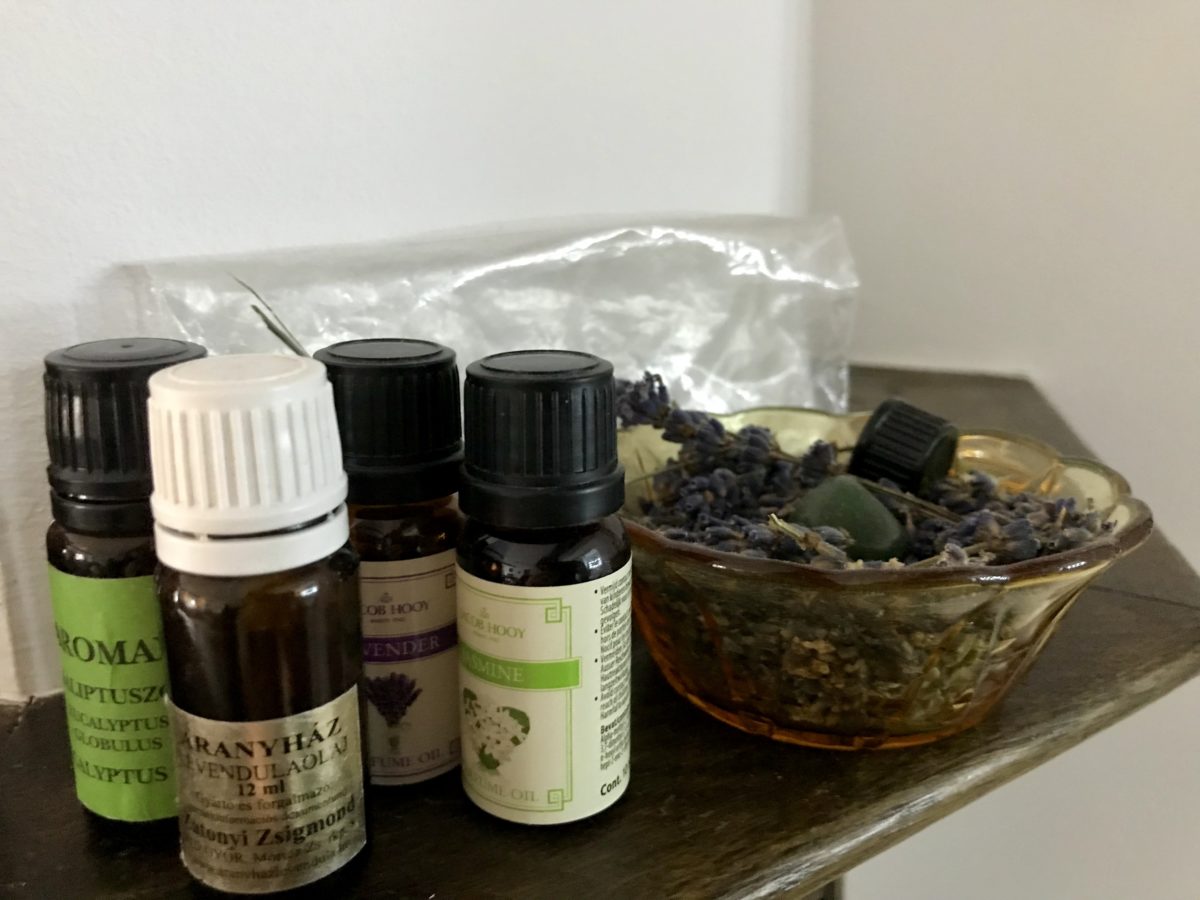 MAASTRICHT, May 17 2019—Earlier this year, on a particularly windy Sunday afternoon, Sally Wyatt and I attended a perfume-making workshop at Amsterdam’s Mediamatic Biotoop. The workshop—Introduction to smell: Make your own perfume—was led by Frank Bloem, a Dutch artist who uses scent as his primary medium, and who educates on perfumery.

The three-hour-long workshop, took us on an olfactory journey through the essential oils, and layers, necessary when crafting a pleasant, intriguing, and long-lasting perfume. Here—sitting around a large, circular table, in a many-windowed workspace overlooking one of Amsterdam’s numerous bodies of water—we listened and smelled, as base, middle, and top notes were passed around the room.

First, we learnt that base layer smells—made up of animal* and earthy scents—are heavier and help to ground the perfume, allowing it to linger. These smells included such things as musk (from deer), ambroxide (the synthetic form of ambergris, produced in the digestive system of sperm whales), and castoreum (from the anal gland of a beaver), along with patchouli, tonka bean, and oak moss. One particularly potent base scent was a synthetic form of civet—a glandular secretion produced by the civet cat—smelling, to my nose, of chemically cat pee. As we passed the civet around the table, and each took turns surrendering our nasal passages, there were many strong and visceral reactions—eyes were squinted, noses were scrunched, and the occasional squeal was let out. Amidst these reactions, however, we were counselled not to immediately discount the use of this scent, as it softens with time and helps to enhance floral tones.

Middle tones were next, and these flowery delights were more in the realm of what I had imagined a perfume might draw upon—including, lavender, rose, geranium, and jasmine. Within this layer, new olfactory experiences came in the form of floralozone (which smelt of thunder storms), mimosa (that somehow reminded me of a cross between oil paint and cucumber), and indole (the smell of white flowers which have gone bad—and for me, therefore, reminiscent of a funeral home, or, a vase neglected).

Lastly came the top layer scents; a layer made up of more familiar—yet swift to  disappear—smells, which were divided into two categories: ‘citrus’ and ‘kitchen’. We were told that these smells might be used to ‘catch’ the nose before they fade, with the middle and base layer smells left to linger on the skin. Top layer scents comprised, for instance, mandarin, lemon, and bergamot, alongside coriander seed, basil, black pepper, and cedarwood. Here, we were also presented with three different scents from the orange plant: neroli (from the flower of the orange tree), petitgrain (unripe orange), and orange (that is, the fully formed and ripe fruit). 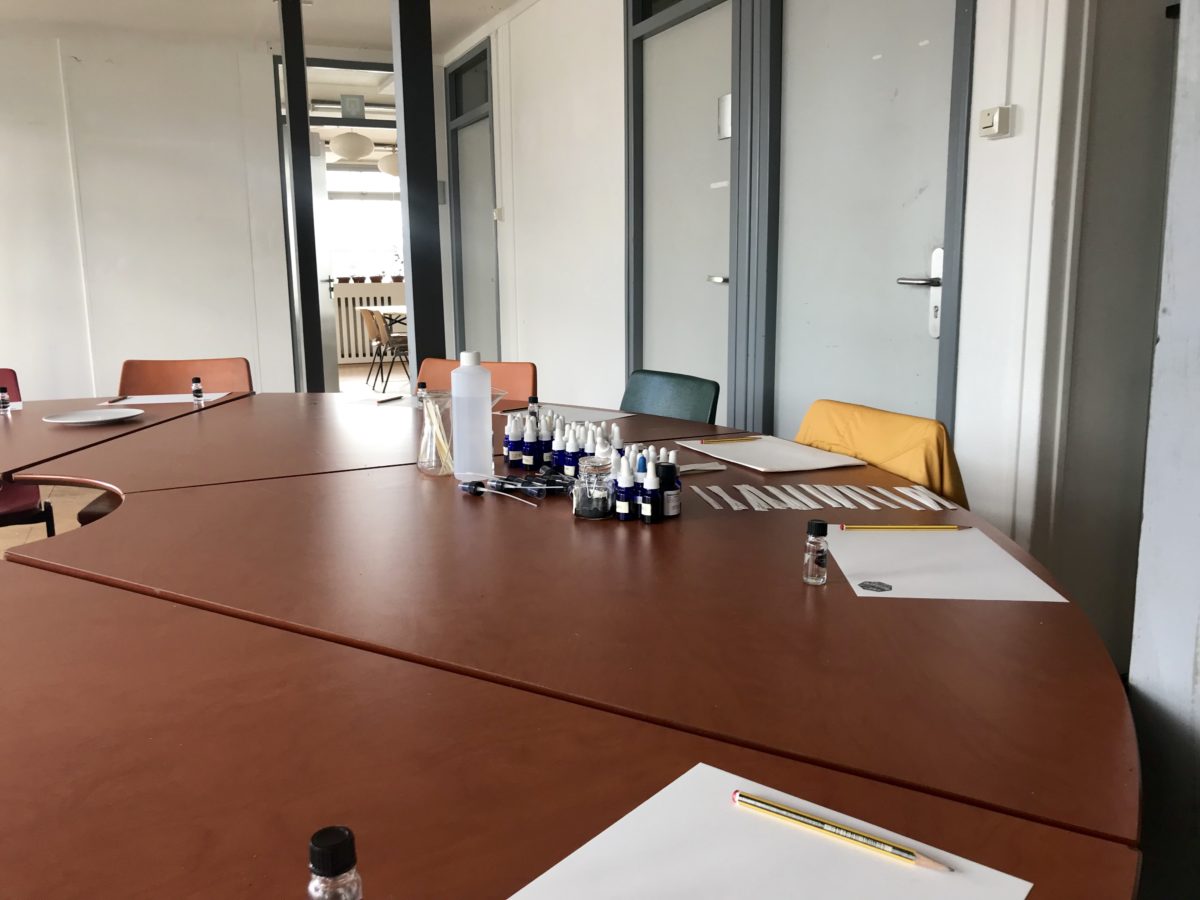 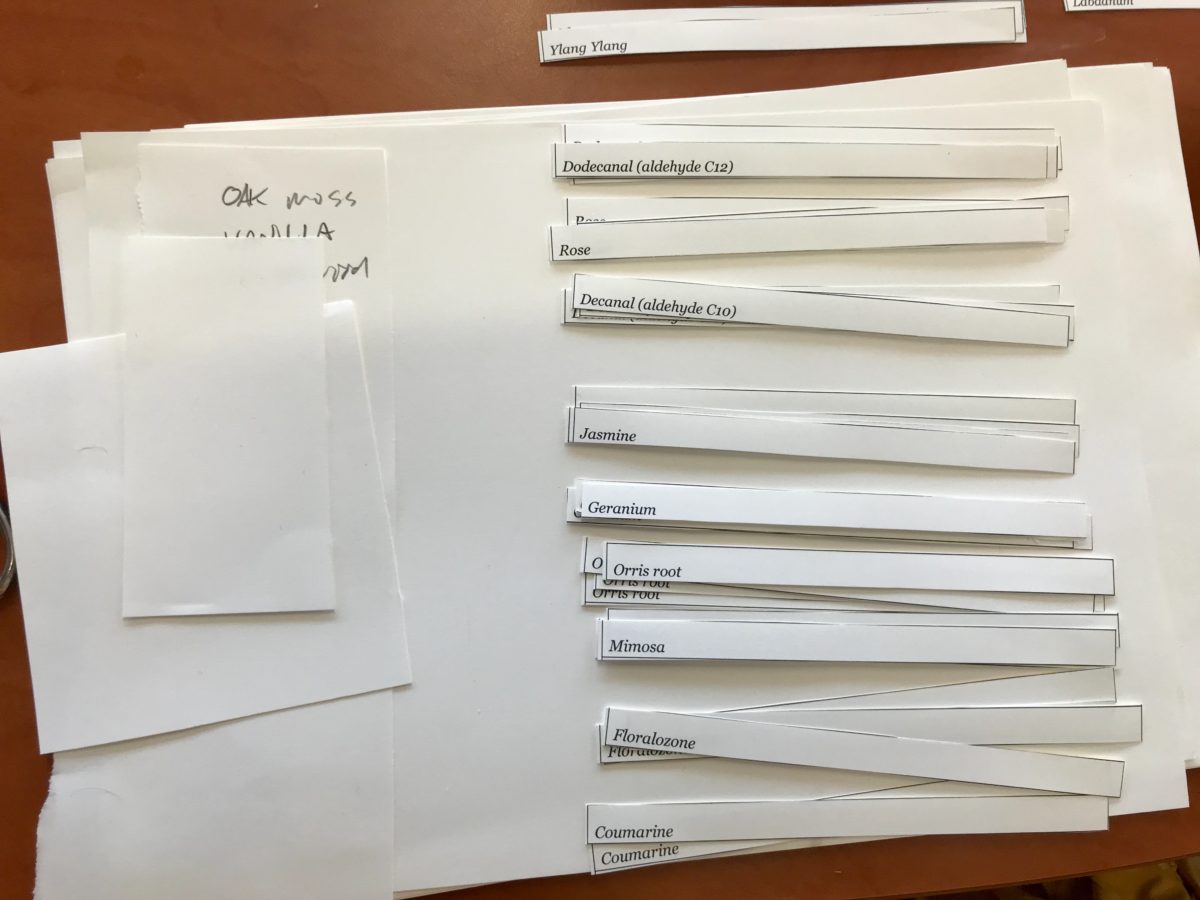 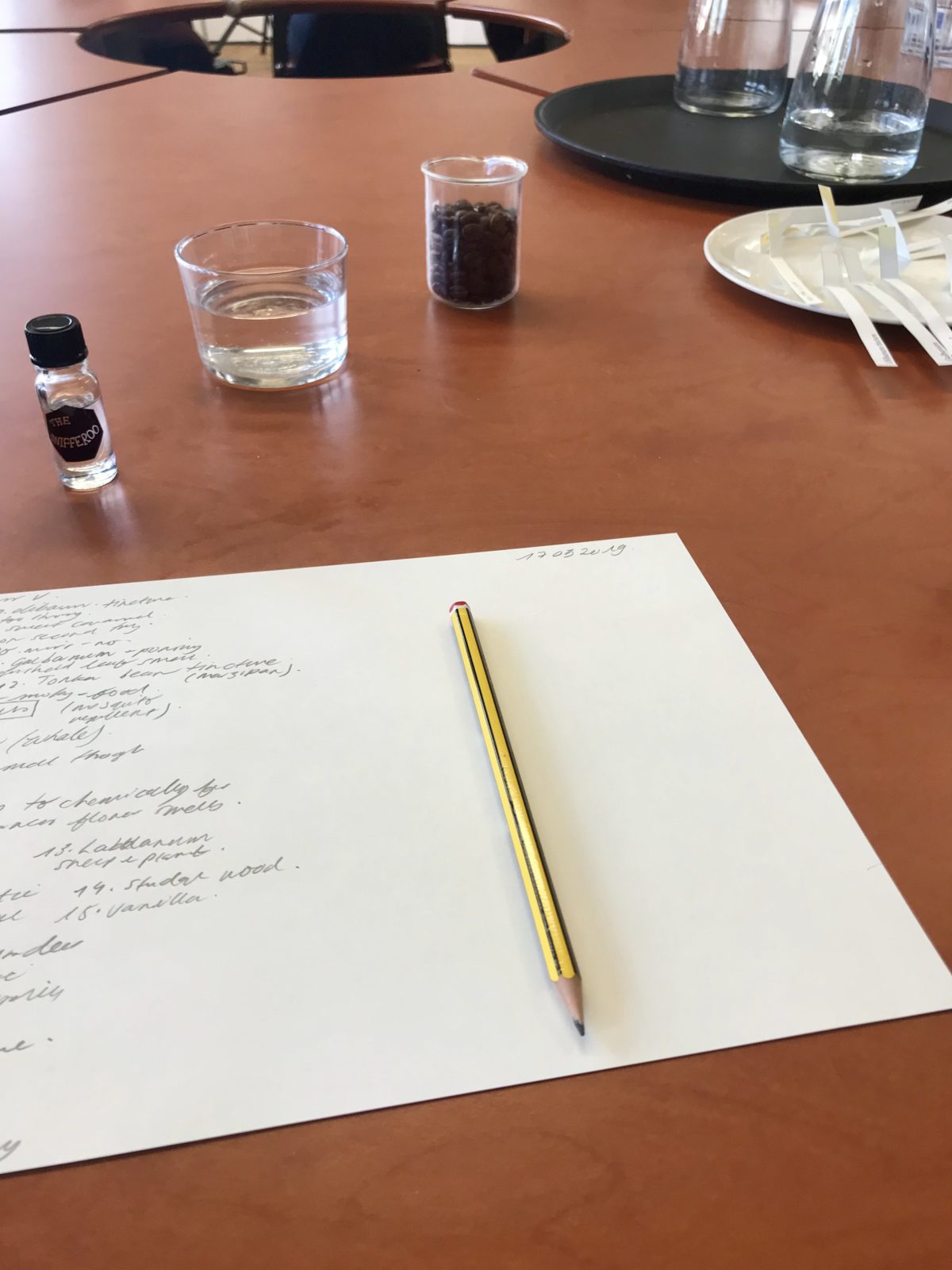 Photos from the workshop. Rachel Allison.

Our journey—as painted above—through the three layers of perfume, however, provides more than a window into the nature of perfumery; it also touches upon some key puzzles and questions our team faces in thinking about and studying the senses. For instance, when discussing the base layer, I described that, though repugnant to some, civet is a key ingredient in many perfumes, because of the way it lingers on the skin and interacts with floral scents—indicating the multiplicity of each scent, and our experience and perception thereof.

Secondly, when recounting the middle layer smells, I relied upon my memory and personal relationship to the scents to describe (the perhaps previously unheard of) floralozone, mimosa, and indole. Indeed, throughout the workshop, Sally and I both noted the difficulty we had in describing and naming the many scents presented to us. Frustrated by our inability to name and communicate, we noticed that we began to parrot our instructor, using the words he chose, to translate meaning between ourselves. Though a useful tactic, we were later encouraged to instead ‘not be too scientific’ in our understanding of the scents. Here, we found it better to drawn upon our relationship with the smell—to describe the smell through memory or association—that is, what it reminded us of (thunderstorms, for example), or what experiences and memories were triggered when taking it in. By associating smell and memory, we had a better chance of not only communicating amongst ourselves, but of also remembering the scent of each oil.

Lastly, when smelling our way through the top layers, we were presented with three scents derived from the orange plant. I was sceptical at first as to whether, and how, these would be different. Indeed, they were different, and I was particularly able to detect the differences when recalling memories of my father’s orange trees in bloom (neroli), a scent which I had all but forgotten until this workshop—once again illustrating the entanglement of scent and memory. However, I do wonder, without the introduction and naming of the scents, the degree of difference I might have detected on my own.

Indeed, these examples each speak to what was my primary frustration and takeaway from the workshop—that is, how challenging it is to describe, communicate, and translate sensory experience. This, of course, relates to a key question within the Making Clinical Sense project, how do medical students learn the sensory skills of physical examination?—or, how are sensory experiences translated between actors (both human and non-human)? How are smells taught and doctors’ noses trained? A skill, for instance, necessary to diagnose a diabetic patient’s breath when blood sugar levels become too high—as described by Anna Harris in her forthcoming book A Sensory Education. How are minute differences in sound learnt and translated between teacher and student? For example, in the form of a diastolic heart murmur, communicated through tapping and hand gestures—as I witnessed during clinical rounds at Semmelweis University. And, how might touch be translated? Necessary when interpreting a patient’s pulse, or feeling for a pathological prostate—as Andrea Wojcik has documented.

Though smells may, indeed, as Ackerman suggests, move us so intensely due to their ineffable qualities, and though we do, indeed, live in a particularly ‘sayable’ world, we must continue to investigate these questions, looking for the various, ‘non-sayable’, non-cognitive, and embodied translations of sensory knowledges, if we are to properly comprehend sensory skill and, in turn, the teaching and learning of physical examination skills. 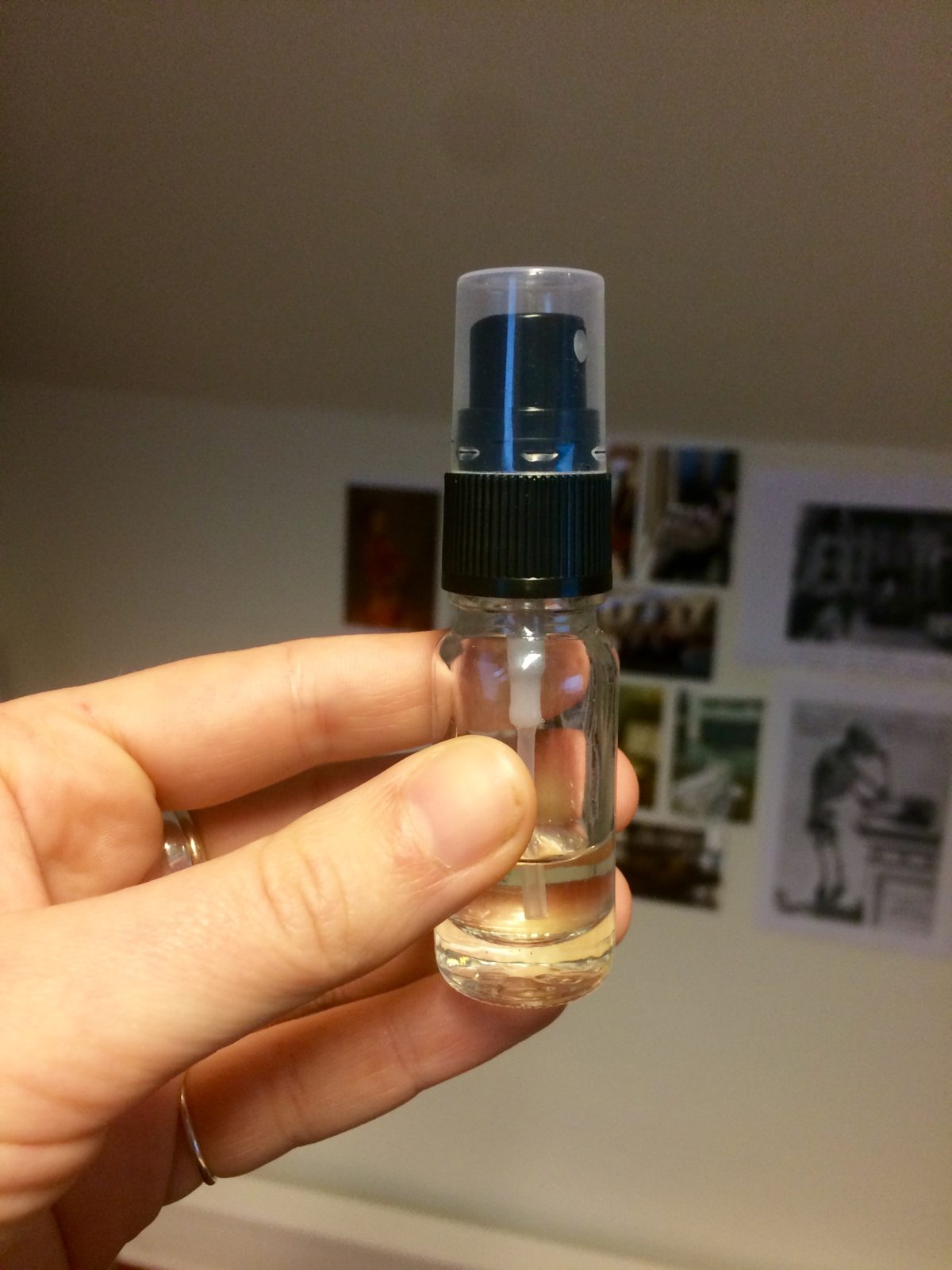 My recipe and perfume.

And—for those interested—my recipe from the day:

*All animal extracts used were synthetic and vegan—animal scent extraction can be a painful, cruel, and deadly process, and is, of course, unjustifiable [see, for example, goddessgarden.com].