Our three sites are all very different. In fact, that’s the point. More than anyone else in the MCS team, I’ve had the opportunity to linger in and wander around all of our medical schools—to absorb these differences. This was a happier time, pre-coronavirus, when lingering and wandering and idle conversation were all possible, and even encouraged as part of a thorough ethnographic inquiry. That all three sites are materially and pedagogically distinct is, again, at the heart of our project.  But material distinction is not limited to the models, manikins and textbooks which are used to confer anatomical knowledge or learn clinical skills. A more expansive reflection on the material environment might also consider the stately, fin-de-siècle architecture of Semmelweis’ Anatomy Department, or the utilitarian, simulated consultation rooms in Maastricht’s Skillslab. These material surroundings contribute to an abstract sense of place which is difficult to define. It is individual and experiential, a semi-conscious processing of the sensory queues we used to receive when we were allowed out of the house, to linger and wander and engage in idle conversation.

Theorists from a range of disciplines have defined this phenomenon in a range of ways. Personally, I like the term ‘affect.’ To me, at least, it suggests some active, agential force which somehow exerts lasting influence. As I sit in my flat in Maastricht, it is the affective experience of these three medical schools which has remained with me and, undoubtedly, with the generations of students that have had much more affecting experiences in these schools than I did. The affective influence of medical schools is perhaps because of their oddness, replete with cadavers, skeletons and manikins used to simulate prostate exams. Foucault might have described them as ‘heterotopias’, Edward Casey would likely say they’re ‘thick places.’ In any case, I’ve been thinking about the relationship between the histories of these schools and their individual, affective natures. In particular, how much, if any, of this was planned?  And what does this mean for students’ understanding of medicine? 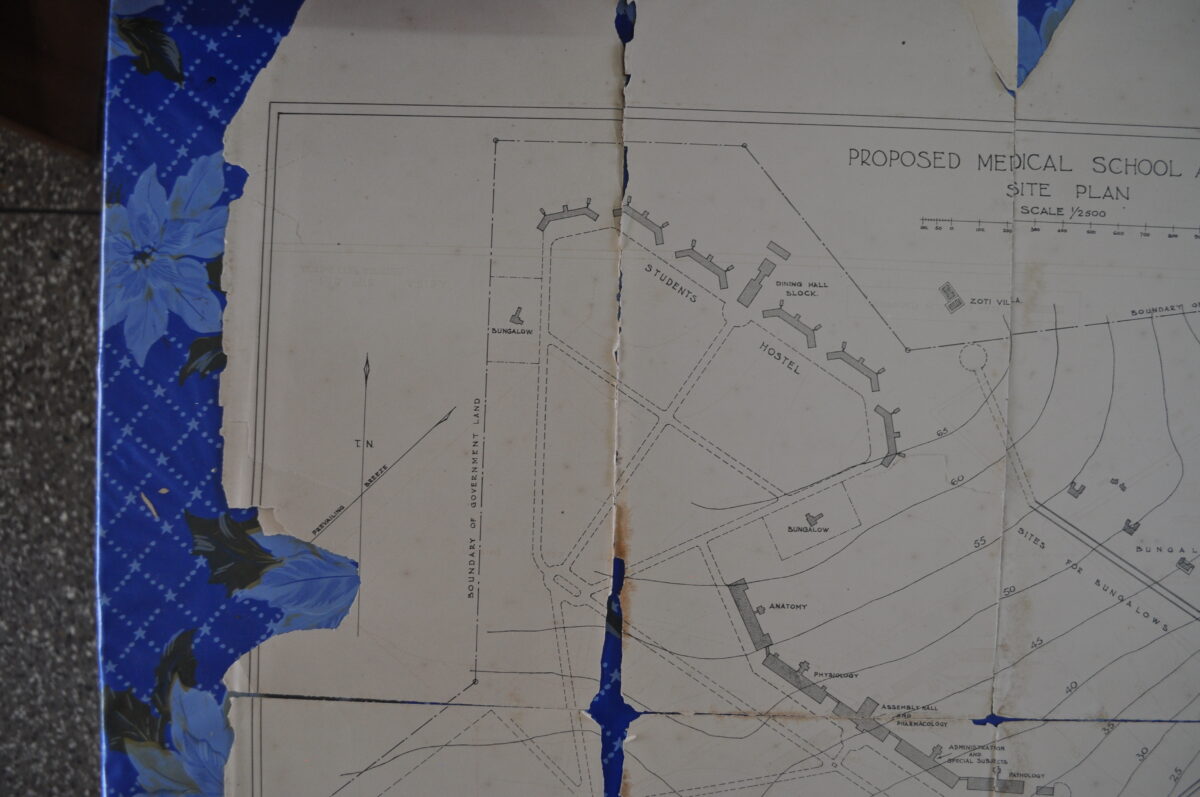 In the 1920s, Accra was one of the sites considered for the construction of a medical school in British-colonial West Africa. A 1928 Colonial Office report even included detailed blueprints [1]. Appended to the city’s main hospital, the school would have consisted of long, low-rise buildings, each containing individual departments, as well as on-site dormitory accommodation for students. The report also made clear that this university would not teach students to the same level as a British school, nor would its degrees be equivalent to those granted by metropolitan universities. Here, students were to be cloistered away from the city proper, transposed into well-planned, quarantined areas defined by European architecture. Under British government, the spatial distinction of the university was intended to promote the development of a professional class employed in the interest of empire. As one educationalist in Accra noted in the 1940s, university education was intended to provide ‘a higher appreciation of British life and civilisation.’ It might be said that, in these plans, we see the origins of what Ann Laura Stoler has described as ‘imperial debris’, the affective material and spatial remnants of empire.

This school was never built. Instead, following independence from Britain in 1957, a medical school was quickly established, in an ad-hoc fashion, around repurposed hospital buildings. Through the 1960s and early 1970s, several plans were made and then shelved for the construction of an integrated medical school and teaching hospital. This was intended to consist of a group of modernist, high-rise buildings which, like the emergent nation, were based on the ideals of self-determination, ‘designed … [to] encourage patients to help themselves as soon as possible, as a therapeutic measure.’ Architectural and communications technologies were to be employed as a means to integrate teaching and treatment as part of a ‘continuous and harmonious’ system. Buildings were to be linked by covered walkways and telephone lines, closed-circuit television would be employed to link teaching with the clinic. Sadly, most of the architectural drawings are missing, but what does exist reflects the political economy of the Ghanaian 1960s, the influence of modernisation theory and faith technological advancement as a route to rapid social and economic development [2].

The spaces of medical education materialise ideas, ideals and assumptions regarding medicine and education, they emphasise the expectations which are made of medical students and corral them in shared experience. These assumptions and expectations are, necessarily, historical, drawing from the specific context in which plans were first drawn up. So, as a result, is student experience. Affect is moulded by historied materials and spaces. The new teaching hospital at Legon was finally inaugurated in 2018. As is often the case with the most recent past, understanding the circumstances of its construction is muddied by its closeness and our lack of perspective. These plans haven’t yet made it into the archive and I haven’t yet visited, but I look forward to wandering around and to seeing what stays with me after I do.

These plans can be found at the Public Records and Archives Administration Department (PRAAD) in Accra. My thanks to the staff at PRAAD for their assistance over the course of this project, it is always an enjoyable experience.

[1] PRAAD, Accra, ADM/5/3/26, ‘Report of the committee appointed by the secretary of state for the colonies to formulate a scheme for the establishment in British West African of a college for the training of medical practitioners and the creation and training of an auxiliary service of medical assistants, 1928’