Model-in-progress to demonstrate cranial nerves of the eye muscles

MAASTRICHT, February 19th 2019 – Tinkering is a practice which underlies most medical endeavors, from celebrated inventions such as the stethoscope – which began as a rolled up paper tube and through some experiments on a lathe, soon developed more into the instrument we know today – to everyday work of clinicians in clinics and hospitals. Annemarie Mol, Ingunn Moser, and Jeannette Pols edited a beautiful book on this topic called Care in Practice: On Tinkering in Clinics, Homes and Farms. Clinicians and technologists have teamed together in non-profit organisations like MakerHealth, to celebrate the tinkering work of hospital staff. In the movie The English Surgeon, you can find the neurosurgeon Henry Marsh at work in his workshop, as well as in the operating theatre. In fact, you just have to read any obituary about a medical innovator to learn about the tinkering work that made them famous. Yet amidst all of this talk there is very little about the tinkering of teachers in medicine, and the creativity that goes into their daily educational practices. As I have written before in an article published from this project, the improvisation of teachers is often unspoken of. So when an invitation came from my fieldsite in Maastricht, to hold a workshop for teachers, I thought there was no better topic and expertise to share, than the very creative expertise in the room.

In preparation for the workshop designed to explore the creative possibilities for how to teach physical examination skills, I asked participants to think about the homemade tools they had adapted, copied, invented, used in teaching, or heard of others using, and come with these ideas to share (or bring along). Optionally they could bring some materials to work with, and read an article. 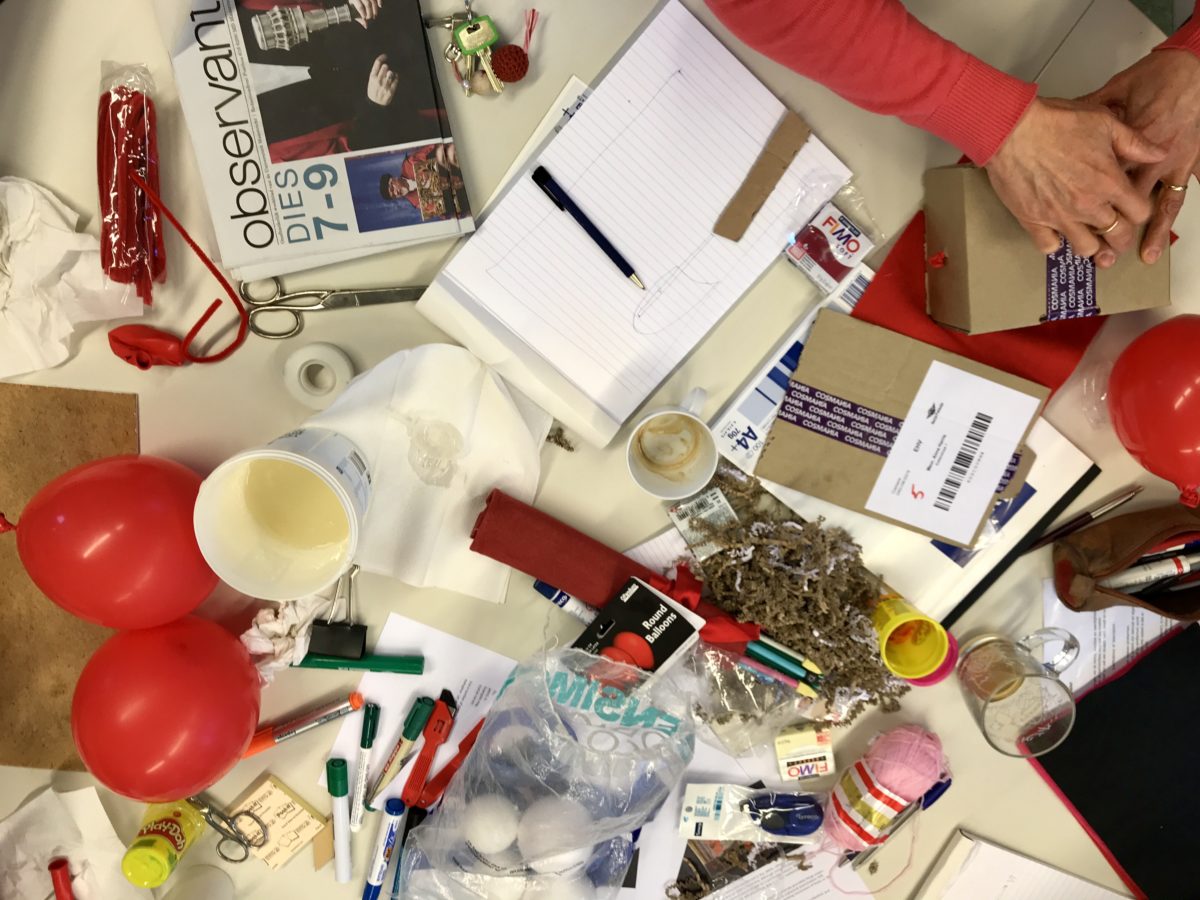 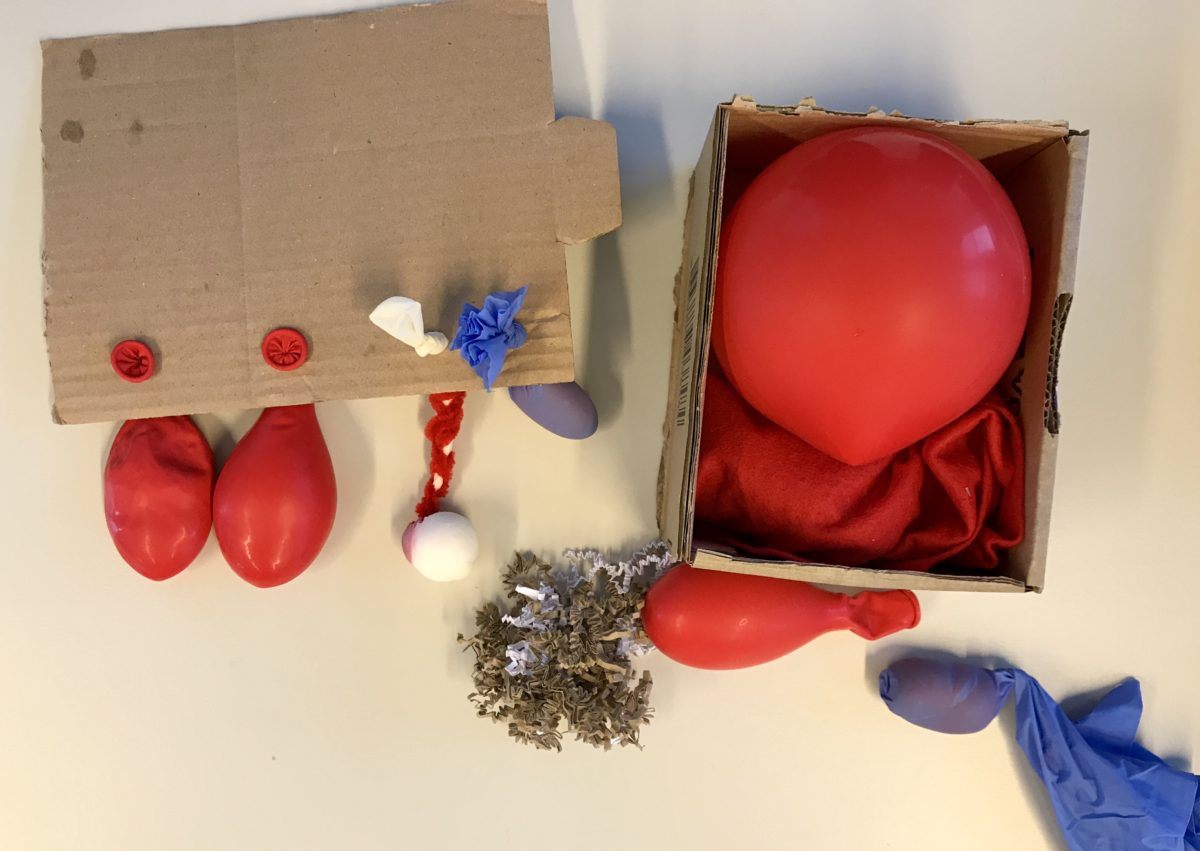 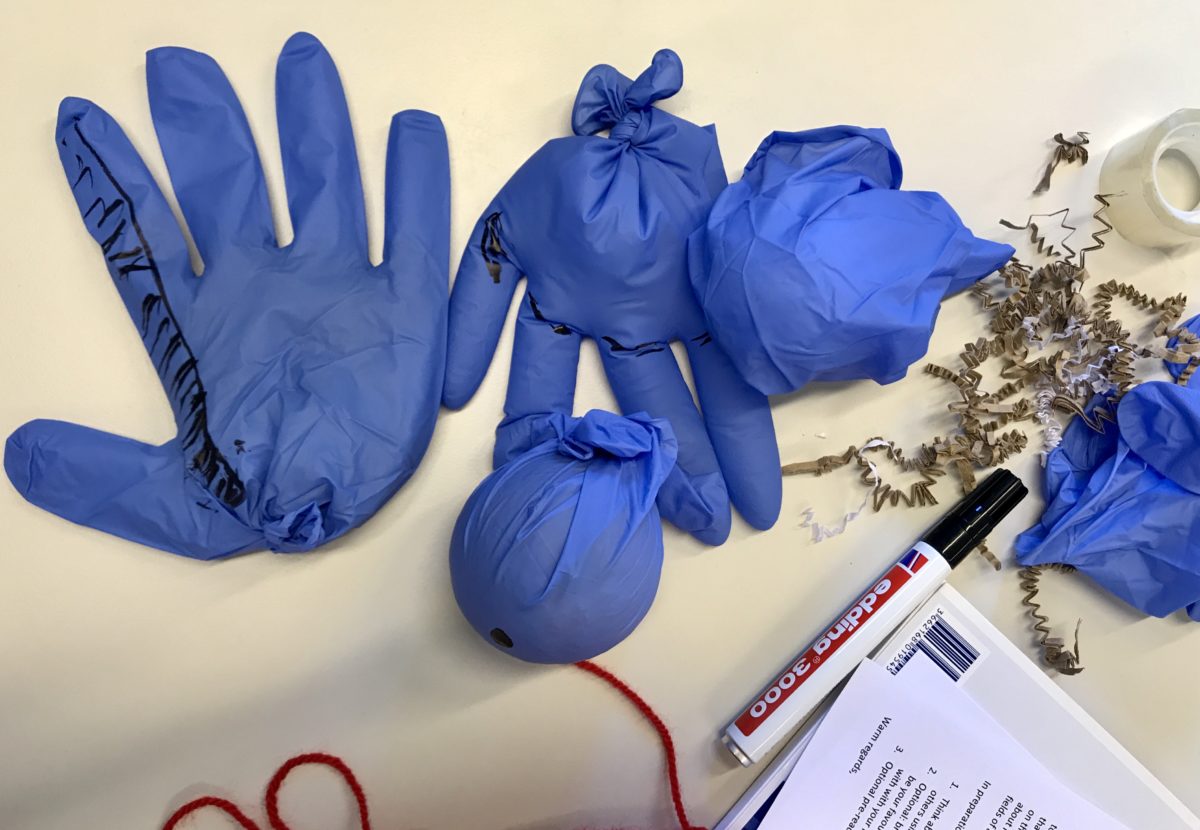 Valentine, the student assistant on this project, and I ran the workshop for the 20 or so teachers who enrolled, arriving at the Skills Lab laden with the materials we had brought. First, I contextualised the theme within the findings of the Making Clinical Sense project and some of the theories and methodologies underpinning the day’s activities – work on critical making, everyday design, creative learning, ethnography and tinkering for example. We emphasized that the workshop was about attending closely to materials, and the creative possibilities of working closely with them. Teachers were sitting around tables piled with balls of wool, plasticine, Fimo, paper, glue, scissors, balloons, pipe-cleaners, balls and elastic bands. Our role was not to teach the teachers anything, but rather to learn from and with them, and basically just allow the time and space for tinkering in their busy work schedules.

Then the teachers shared ideas with each other: how one teacher starts his class on heart murmurs by slamming the door shut, now the mitral valve, and getting the students to imagine they are standing in a ventricle of the heart – he also rubbed his shoes together to simulate the squeaking of pleural rub; how another would pretend to be an atrial arrhythmia with her body – funny another responded, I am a uterus with fimbrae, she said, both standing up and shaking their limbs. Someone had brought in a homemade model of the various angles of the uterus, and another teacher described how she used a balloon to teach ascites, by filling it with water. They discussed how the students paid attention in a different way when they experimented with these methods.

With all this talk of ideas, it was definitely time to work with the materials on the tables and it wasn’t long before the glue gun was being warmed and plasticine being molded in hands. There were some instructions – make a body part to use in teaching physical examination skills, draw a poster to show a skill, make oranges to resemble stages of cervical dilation – but these were soon discarded by most teachers. Balloons were blown up and filled with water to copy the ascites figure, one bursting over all the instructions. Balloons were filled with plasticine to show pitting edema. A series of balloons made a chart of scrotal pathologies for palpation and comparison. Styrofoam balls were turned into eyeballs, with elastics on either side making the muscles of the eye, and little felt tags on fingers showing which cranial nerves pulled them. The inguinal region was made using bits of cardboard and plastic bags. A box holding some of my materials was upturned to allow room for a balloon and scrunched up felt, to practice comparative percussion. Two socks were turned into scrotum by being stitched together, so that they could be pulled for examination.

After an hour of making the medical teachers put their projects on a table and took turns guessing what they might be, with much laughter. They looked at the objects, picked them up and tried to move them. Some textures were surprisingly similar to the body part being simulated – the pitting edema for example – whereas others were poor imitations – the crinkly cardboard. Teachers who had crafted the objects explained why they made them – to try and teach a complicated part of anatomy, like the inguinal region, or complicated neurological processes, like the cranial nerves. There were many models of male genitalia which is of no surprise, considering this is a very tricky examination for the students, and one which currently they do not have very good models for. The teachers observed when existing models might do better, that the tool they just crafted was too complicated, unnecessary, too distracting or the scale wasn’t right. Sometimes they wondered how they might make another version, from different materials. They talked about how sometimes it was the problem that came first, when designing their object, and sometimes they just worked with what materials were to hand. They also wondered what the students might be making themselves?

As education strives for efficiency, standardisation and assessibility, more room is needed for making, every day design and tinkering in medical education. Such activities are not reactions against the digital but can also inform digital technologies in the classroom. It was a privilege to be able to spend a morning working with incredibly knowledgable and inspiring teachers, who make time for tinkering, not only in designated workshops.