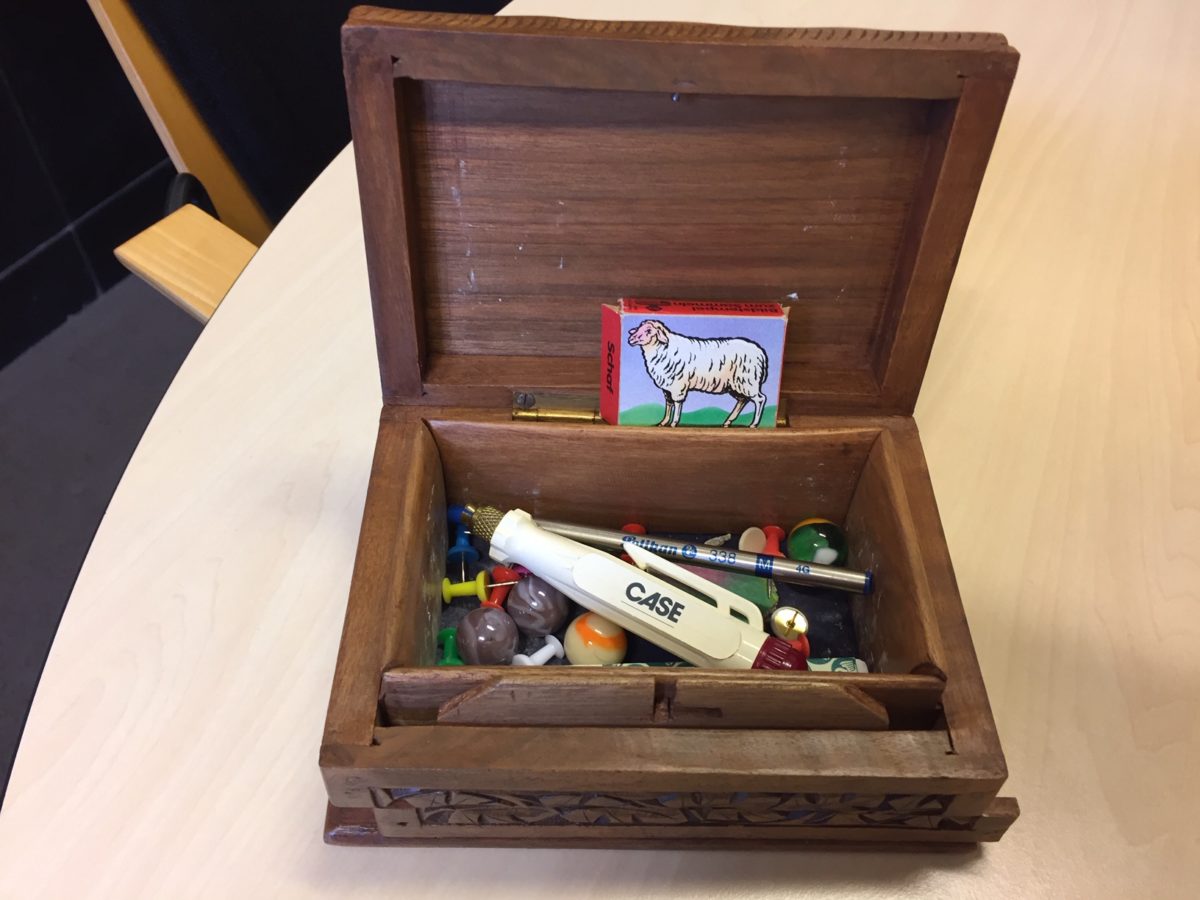 10th JANUARY 2019, MAASTRICHT – On my desk at work is a small wooden box. It was a present from a student, given to me in the mid-1990s when I still worked in London. I quite often receive presents from students – bottles of wine, flowers, books or book tokens. One of the best was a voucher for ice cream. My philosopher partner rarely received anything from his students. I always thought it was gendered until discussing this with another heterosexual academic couple where the man frequently received presents but the woman never did. Leaving aside the workings of the academic gift economy, this small wooden box is particularly special.

It is special because you have to know the trick to open it. There is always something rather magical about a secret box with a hidden compartment. It is also special because of what it contains. This is a box of its time. There is chalk inside. Not just any chalk but special German chalk that has paper around it so your fingers don’t get covered in chalk dust. Now we have computer screens onto which we project the presentations we prepared prior to class, and maybe a white board or even a smart board for more immediate ideas and explanations. But when I started teaching, we still used blackboards, and hand-drawn overhead sheets. Chalk is very visceral, plus you had to think about what you were wearing. Black is never good with chalk dust. I don’t remember ever receiving any health and safety instructions about using chalk, but I do remember that it severely aggravated sore throats. I was glad to find that my German colleagues had found a way of alleviating the chalk dust problems, and stocked up on this when in Germany. My English colleagues were envious.

There is also a tiny screwdriver inside, with the Case Electronics logo on it, something I received from a conference. The company is still around offering computer and telecom services, including repair. Personal computers had started to appear on academic desks in the 1980s, but probably only became standardly available in the mid- to late-1990s. This was before they had become completely black-boxed. Sometimes you needed to open them, to adjust or replace the motherboard. If you tried that now you would have the ICT service people or the US security services down on you like a ton of bricks. Apple’s CEO recently admitted that while repairing iPhones is the environmentally responsible thing to do, it is bad for Apple’s profits. A colleague was stopped recently when entering the US because his laptop looked as if someone might have been tampering with it in some suspicious way.

There are also some items of sentimental value. I visited Berlin a few times in the 1990s, not too long after the collapse of the Berlin Wall (1989). These little pieces of painted concrete allegedly come from the wall, but I suspect it might be like the pieces of the cross. All those little pieces of concrete, now for sale in Berlin tourist shops, would make for a very big wall. Also from that period of my life is a tiny rubber stamp for making sheep images, and an ink cartridge for a very beautiful Pelikan pen. I have absolutely no recollection as to why I have saved a few marbles and push pins.